Lorber: Face What Scares You

(Host) While trick-or-treating is usually geared toward kids, this Halloween, performer and commentator Jason Lorber has been thinking about what adults should be scared of - but in a good way.

(Lorber) Boo. Did I scare you? Yeah, I didn't think so. Boo doesn't scare me either.

Here's what frightens me . Facing my fears. When I'm really facing my fears and not just pretending to, that's what keeps me up at night. And I face my fears, because as scary as I find them, I find them even scarier when I don't face them.

I was taught way back in Business School that when you're starting a business, you should address the risky part first. That way if you address the risk - which is usually the scary part - then you find out early on whether you can conquer it, or whether it conquers you. And frankly, I'd rather know early on, so that I can go do something else if I need to , or else learn from my failings.

And that's hard to do. Not the failing part - that parts easy. But facing your fear head-on, that takes guts. And it also takes skill. Where I learned to practice that skill, to build my bring-it-on muscle, is from performing improvisation.

Most people associate improvisation with that TV show, Whose Line Is It Anyway, where the audience throws out suggestions to actors who have to accept them. Someone in the dark, comfy seats in the back of the theatre shouts out Tiger! and some else yells Roller Coaster and the director bellows, You're on a roller coaster with a tiger ... Go !

As an improviser, you don't get to reject the assignment. You're on stage. In front of everyone. You have to say yes. And you have to make it work. So no matter how absurd, how uncomfortable, how hopeless the task, you have to face this new scary task. So you start.

Now sometimes it works better than others. But an audience is generally supportive - especially if they see me trying. After all, who can fault a guy, even if he's falling on his face, when he's trying. It ain't easy. And neither is life.

That's why more and more attorneys, politicians, accountants, non-profit executives, and just plain old normal people are studying improvisation. It's because they want to, need to, and are afraid of facing what's right in front of them. That's true whether they're afraid of risk at work, in personal relationships, or in general - that LIFE thing again.

I know some people may think it's masochistic to actively go after that which haunts them. But I have a different word for it: savvy.

So, I've got a question for you this windy, rainy Halloween evening, and that is: What scares you? 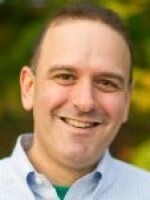 Jason Lorber
Jason Lorber empowers and inspires teams at companies and non-profits through his business, Aplomb Consulting. He has an MBA from Stanford, and is a former Vermont state legislator.
See stories by Jason Lorber
Subscribe To 'The Frequency,' Our Daily Morning Newsletter
Get up to speed on the news Vermont is talking about, delivered to your inbox every weekday morning.
Sign Up