(Host) For the annual Commentator Brunch earlier this year, the theme was When Worlds Collide... and we're hearing recorded excerpts from that event all this week. Commentator Kathryn Blume's take on the theme was decidedly domestic.

(Blume) I'm Kathryn Blume and this is The Space in the Venn.

I was hanging out with a group of friends when the conversationturned to marital dynamics, and who's responsible for what in each relationship. When the focus turned tome, I didn't even think about who's what with my husband . I just opened my mouth and out popped, Mark's in charge of everything, and I'm in charge of Mark!

Given that Mark is a highly linear, time-sensitive,detail-oriented fellow, and I'm more of a wildly emotional, intensely creative,big-picture thinker, it seems to work synergistically as an overall structural dynamic.

Ironically, Mark was raised on a hippie commune in the deep backwoods of Charlotte by a loose-knit tribe of half-naked, wine-soaked artists, while I grew up with sexually repressed, highly intellectual,Volvo-driving Jews in suburban white bread Portland, Oregon.

Mark, of course, always hated his surroundings and wanted nothing more than to live in Cleveland and EAT  white bread. I was powerfully drawn to the one family we knew who lived in a free-form concrete house they built themselves, ate off rough clay plates handmade by a potter they knew personally, and drank tea made from an exotic herb called ginseng.

I often think of us sort of like the marital version of a Venn Diagram- you know, one of those images of intersecting circles where you look at where and how they overlap.

Fundamentally different as we are, somehow, Mark and I have managed to meet at the point where the circles of our hopes and histories merge. Or, occasionally, collide.Sometimes, though, we just miss each other completely.

My favorite moment of Utter Convergence Failure happened one late winter afternoon when I was taking a candle-lit bath, scented with ginger and jasmine and listening to the velvety tones of kd lang.

Carried away by the sensuality of it all, I called to Mark,Hey, wouldn't it be great if kd lang was your lover? He shouted back from the kitchen, why? and I said, Because she'd sing to you!

Wow! I thought. We're not just different, totally non-overlapping circles here. We're more like a couple of galaxies zooming in opposite directions across the universe!

But then Mark surprised me by joining me in the tub. Thereby proving that opposites - no matter how extreme - do manage, sometimes, to attract. 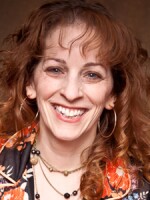 Kathryn Blume
Kathryn Blume is the executive director of the community climate game Vermontivate! and board chair of 350VT.
See stories by Kathryn Blume
Subscribe To 'The Frequency,' Our Daily Morning Newsletter
Get up to speed on the news Vermont is talking about, delivered to your inbox every weekday morning.
Sign Up