(Host) As she prepares to retire from the Burlington Free Press after 30 years,journalist Candace Page reflects on what she owes her mother and fellow journalist, Ruth Page.

(Page) My mother, Ruth Wolf Page, celebrated her 90 th birthday this month. It's been only a year or two since she retired from her final job. She's a hard act to follow.

When I was a child, Ruth and my father, Proctor Page, owned a weekly newspaper - although it might be more accurate to say the newspaper owned them. Most of the news in the Suburban List consisted of town notes, submitted by correspondents who mailed in bulletins about Grange socials, out-of-town visitors and their neighbors' trips to the hospital.

Mom was the one-woman professional staff, with an occasional hand from Dad, who ran the business side. One of my most enduring memories of childhood is of mother sitting at the kitchen table on a Sunday night pounding out the week's editorials. That cleared the decks so that during the week she could work all day, cook dinner for a husband and three children in Burlington each evening, then drive back to the suburbs to report on whatever town board was meeting.

She and Dad sold the newspaper in the late 1970s, but retirement proved not to be in my mother's genetic makeup.

Shere invented herself as editor of National Gardening magazine. That led to a nationally syndicated public radio program, Ruth Page's Gardening Journal, which led to a book. By this time, mom was approaching her 80's and I realized I had to abandon her as a role model because I'd never be able to keep up. Until she was 90, she contributed commentaries to VPR,focusing on the environmental issues that have become her passion.

So perhaps it is no surprise that I find myself, late in my career, as a daily journalist in Vermont, writing about the environment and small town life - a job that has entertained me and enlightened me and kept mefed for more than 30 years.

I left Vermont as a young woman, to write for a big city newspaper. The work was challenging and I became a better reporter, but it also left me feeling empty. My stories went into the newspaper and out into the ozone and evaporated. I missed walking down the street in Essex or Burlington and having people stop meto praise or complain about a story. I missed knowing the family history of the people I wrote about. I missed community. Soon I came back to Vermont.

My mother taught me to be a writer, but her greatest gift to me professionally was the life she led as a working-woman journalist. It never occurred to me that journalism was a man's profession, even in the 1950s. I worked my first assignment for the Suburban List when I was about 9, reporting on the Champlain Valley Fair. With a little shove from Mom I marched into the mobile office of King Reid Lefebvre, impresario of the midway, and asked for an interview about the latest scary roller coaster ride. I've been asking questions ever since. 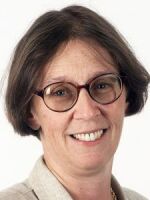 Candace Page
Candace Page grew up in a newspaper family and has worked as an editor and reporter since 1973. At the Burlington Free Press she has served as Statehouse bureau chief, columnist, food writer, editorial page editor and managing editor. She will retire from full time work this spring.
See stories by Candace Page
Subscribe To 'The Frequency,' Our Daily Morning Newsletter
Get up to speed on the news Vermont is talking about, delivered to your inbox every weekday morning.
Sign Up