For Earth Day this year, my students and I are planning an entire week of events that will feature ten things we can do to help save the planet. I’ll tell you what my number one item on the list is, but first a few facts.

The average American uses around 130 plastic bags a year. Most of them go straight to the landfill after use. In one year, all of us together use around 300 billion plastic bags. It takes 12 million barrels of oil to produce this many bags.

The chemicals used to produce the bags pollute the environment, and the bags themselves take 450 years to decompose in water and 1,000 years on land. 100,000 marine mammals die each year because of plastic litter in the North Pacific. For instance, sea turtles mistake plastic bags for jellyfish and eat them – an often fatal error.

As go the sea turtles, so do we. Plastic toxins end up in fish, which end up on our plates, which end up in us. The Ocean Conservancy says that plastic bags are among the top five most commonly found items in their beach cleanups.

All this and more is why a bunch of nations, and an increasing number of U.S. cities, are banning or taxing plastic bags. Since 2008, China’s bag ban has saved more than 5 million metric tons of oil, and around a million metric tons of plastic. In 2002, Ireland started charging consumers an extra 15 cents per plastic bag. This led to a whopping 95% drop in usage within weeks, with 90% of shoppers bringing their own bags. Today, a plastic bag costs 22 cents there, generating millions in revenue for the Irish government’s Environment Fund.

So here’s my #1 suggestion, although you’ve probably guessed it by now: Switch from plastic bags to reusable cloth or string bags. Hey, if I can remember to bring along my own canvas bags, anyone can! It’s easy. I simply keep them in my car for when I shop. They never tear, and they hold more items.

And here’s my message to supermarket chains: forget the credit of 3 cents per bag. We shouldn’t need a token incentive to do the right thing. I’d prefer a meaningful disincentive, to encourage all of us who care about the Earth to not do the wrong thing. I’d like to see us charged $1 or even more for every supermarket bag we use. I guarantee that would help change habits - and fast.

It’s true that in the tale of the tortoise and the hare, the tortoise taught us that slow and steady wins the race. But I’m afraid that the tortoise’s sea turtle cousins don’t have all that much time – and, frankly, neither do we. Things are moving at a pace more reminiscent of the hare these days - environmentally speaking, that is. So when I’m given a choice between paper and plastic, I’ll decline both and choose Planet Earth. That’s our real choice now. 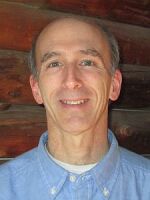