Canadians... eh?  All we really know about them is that they live right up there, and that they're really polite, except when it comes to hockey and beer.

I've been asked before if I used to ride a moose to school. I usually just tell people my parents kept an elk in our backyard.

Yep, I'm Canadian. I was born in Winnipeg, Manitoba, which is right above North Dakota. I moved to the States with my family when I was young, and I want to tell you all about the immigration process. That takes a long time, but don't worry, my story won't.

Let's talk immigration: you pretty much have three choices if you want to move to the United States. You can become a US citizen through a process called naturalization, or you can apply for your permanent resident card, called the "green" card. Your third option, of course, is illegal immigration.

I am what they call a "landed alien". (Eh?) I carry a permanent resident card and still retain Canadian citizenship. I moved to Vermont about twelve years ago when I was seven. My dad was hired to work in the states under the North American Free Trade Agreement. He was issued a Trade-NAFTA visa.

So my dad lived here in Vermont for a while without my mom, my brother, and me, until he received something called H1-B Immigrant status. This expires after three years, and can only be renewed once.  My mom, my four-year-old brother, and I came down after that and it was a few years before my mom was allowed working papers for the US.

At this point, we were living in the States legally but with no permanence. We were allowed to stay, but at any moment, the US government could deport us. Eventually, the paperwork went through and our family received our green cards. We are now a family of permanent US residents, able to live and work both here and in our home and native land up north.

I go to university in Sherbrooke, Quebec, and I'm so grateful I retained my Canadian citizenship, because it means I get reduced tuition rates at school.

Because of my status, I think I have a different viewpoint on the debate regarding illegal immigrants. My family had to jump through a lot of hoops to be granted the right to live and work in this country, and when I hear about laws being passed to protect people who smuggled one another across the border, I get a little upset.

You can take it from me: Vermont is a wonderful state.  The United States is a fine country, and it's been very good to us. To take advantage of that is wrong. 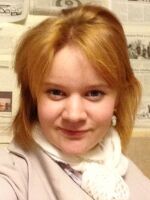 Caleigh Cross
Caleigh Cross of St. Johnsbury and Canada, is a journalism major at Bishop's University in Lennoxville, Quebec. She was born in Winnipeg, Manitoba, and has been writing in various capacities since she was old enough to hold a crayon and figure out what words meant. Her hobbies include Irish and Scottish fiddle, painting, writing, and shopping.
See stories by Caleigh Cross
Subscribe To 'The Frequency,' Our Daily Morning Newsletter
Get up to speed on the news Vermont is talking about, delivered to your inbox every weekday morning.
Sign Up