Vermont is an agricultural state, but you don't have to live on a farm to create your own food.  My husband, Jedd, and I gave up processed food for a year and it brought us “closer to our food” in unexpected ways.

Initially it seemed like an interesting way to become healthier and cut down on packaging going into the landfill.

Like my grandparents had done, we’d be “living off the land.” Well, with a few differences. You can only do so much in a tiny apartment in a small Vermont city. And my grandmother doesn’t listen to podcasts while making homemade cheese or pickling cucumbers.

We had one simple rule for what we considered “processed”: We could only eat something from a package if we could understand all the ingredients. Otherwise, we made it ourselves or went without.

We started by going through our refrigerator and cupboards. Sadly, the flour tortillas were the first to go. Their ingredients read like a science experiment. Into the donation bag they went.

And they weren’t alone. By the end of the afternoon only 4 cans sat on 6 shelves. They looked so lonely that I grouped them all together.

At first I was worried about cost. We're in what some call the “creative underclass.” We celebrate discovering a few dollars in the pocket of a spring coat when the seasons change.

About halfway through the year, we noticed our attitudes about food and convenience had changed. Jedd woke up earlier in the morning to make himself lunch instead of shopping at a gas station.

By June my favorite grocery store clerk said she didn't see me around much any more. Which was true. I'd learned how to make my own crackers, ricotta cheese, soups, pasta, and more. I even froze my own pizza. What started off as a challenge three years ago, turned into a new hobby for the two of us. And it still is.

But, here's what didn’t happen: We didn't miraculously lose weight. We both still get colds. I still sneeze at dust and have a little arthritis in my hands.

However, the first time I tried a processed cheese snack after that year without one, my heart started jack rabbiting. I was drenched in sweat from sodium overload. So, I guess we're a little healthier after all.

Living without processed food for a year was both challenging and fantastic. We've learned more about food grown right here in our state. We’re also much more adventurous cooks. My grandmother says it sounds like we're “making our own fun.” And she's right, we are.

Making our own food is fun, and that's the most unexpected thing of all. 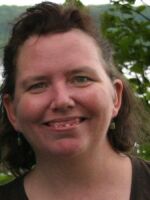 Launie Kettler
Launie Kettler is a food writer and photographer whose work has been featured on Salon, Punk Domestics and Jamie Oliver's Food Revolution Day, as well as linked to by CNN and the LA Times. She also blogs about cooking food in a small kitchen and her husband and cats are tolerant of the fact that she plays the same Wilco albums over and over while pontificating about the beauty of cumin. You can follow those adventures at www.teenytinykitchen.com/
See stories by Launie Kettler
Subscribe To 'The Frequency,' Our Daily Morning Newsletter
Get up to speed on the news Vermont is talking about, delivered to your inbox every weekday morning.
Sign Up