I moved from Morocco to Brattleboro in 2009 to be with my wife, who was starting a masters program at the School for International Training.

This was in the middle of the worst economic crisis to hit the US since the Great Depression, which made our leap risky and uncertain.

I came to Brattleboro with a BA in economics from a private college in Wisconsin and work experience overseas. I didn’t know what to expect in the   southern Vermont town that’s hardly visible on a map. But Brattleboro was easy to find on the internet, because it’s the only town in the world with that name – and that’s uncommon in New England, where early settlers often named towns after their places of origin.

From the start, I was pleasantly surprised by how worldly, welcoming and informed people in Brattleboro are. In fact, most people I know moved here by choice, suggesting that this is indeed a desirable place to move to and make a life. The majority of them own businesses, go to school or prefer to spend the last years of their life in Vermont. Brattleboro’s booming art scene, cafés and diverse population give the town an unpretentious metropolitan feeling. I’ve been surprised to meet people from across the US and from around the world who’ve made Brattleboro their home.

Once we were settled in, I was able to find a job coordinating educational programs that traveled to the west and south of the Mediterranean. The job allows me to utilize the Arabic and French I grew up speaking. I’m also able to travel occasionally, just long enough to get a little homesick. When I return from trips I start to feel at ease when I hit 91 North and see signs to Vermont.

As cosmopolitan as Brattleboro is, my foreign accent still attracts attention, and I’m often asked the existential question, “Where are you from?” Once I say Morocco, the conversation often drifts to topics such as Moroccan food, Islam, Middle East politics and almost always trips taken to that part of the world.

Once, I met a gentle-hearted lady in downtown Brattleboro who kept telling me about her trip to Turkey when she learned I was from Morocco. She even started sharing some Turkish phrases with me; I think it was her way of welcoming me to Brattleboro. However, she left me with the hard task of tactfully letting her know that Turkey and Morocco are more than 3000 miles apart. Generally, I find Vermonters to be curious and inquisitive about the world and the people who live in their community, and I think I’m getting better at handling questions related to my origin, ethnicity and accent, by tactfully shifting the conversation into discussions of local politics and new projects in Brattleboro, my new home. 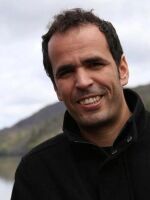 Simo Ouazzani
Simo Ouazzani was born in Fes, Morocco where he graduated from high school and earned an associate degree in linguistics before receiving a BA in economics from Beloit College in Wisconsin. He speaks English, French, Arabic, and Spanish and he will become a naturalized US citizen on June 3 in Burlington, VT. Currently, he coordinates educational programs at Road Scholar, an international travel organization.
See stories by Simo Ouazzani
Subscribe To 'The Frequency,' Our Daily Morning Newsletter
Get up to speed on the news Vermont is talking about, delivered to your inbox every weekday morning.
Sign Up