The task seemed daunting. Design a stress-reduction program for some of the more challenging female inmates at Chittenden Correctional Facility. Specifically, those acting out, or not engaged as quote “good citizens” on their units.

Due to the funder’s interest in alternative approaches to well-being, we settled on a program that combined band drum-line and mindfulness practice. Initial research I’d done showed that rhythmic drumming can enhance recovery for addicts; most women prisoners battle furious addictions to heroin, cocaine or opiates. And meditation has proved to be an effective calming discipline for prisoners the world over.

Fifteen inmates committed to the 16-week program. There inside the prison gym, a professional woman drummer taught us how to hold our hickory sticks. We learned differences between snare, tenor and bass drums, and how to play triplets, quarter notes, and rimshots. The women participants proposed patterns for the drum-line each week, creating their own original music. They took to drumming like rock-star-wannabes, filling the room with gigantic energy. Smiles would erupt around the drum circle as we found our individual niches within the collective synchronicity.

I facilitated the mindfulness segment, which was more challenging. Expecting a person with behavioral issues or mental illness to sit quietly for a few minutes was a tall order. Hands and feet twitched, eyes refused to close, and whispery side-talk punctuated the seated circle. Eventually though, peaceful solitude filled the gym consistently, and the women began to tolerate the ritual.

We listened to the words of Mary Oliver, Rumi, and Francis of Assisi; learned gentle yoga stretches; practiced breathing and walking mindfully. We worked our way up to a 15-minute Loving Kindness meditation by program’s end.

A few nights after the Boston Marathon bombings, the hushed silence in the circle was palpable as we extended the words of a Gaelic blessing to all in that troubled surround: “deep peace of the gentle night to you….”

My signal that the meditation had gone on too long was usually an inmate ripping her sticky name tag off her smock, catapulting us back to reality.

What I learned during this four-month program was profound: the power of consistent relationship to open hearts and foster trusting community; and the well-matched combination of drumming to release stress and meditation to reestablish balance.

I also discovered the inmates with serious mental health challenges seemed to make the greatest progress, and I’m still not sure why.

One 50-something woman boasted during the opening session, “I know why I was chosen for this class—I like to hit things!”

After program’s end, she had not received a disciplinary infraction in five months. I saw her last week pushing a mop down the main corridor of the facility, head bowed in walking meditation mode. She looked up, grinned at me, and uttered, “Deep peace to you.” 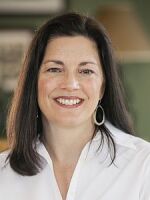