Call it anthropomorphism. Call it hubris. But I’ve always thought the loons on Nichols Pond considered me one of their own.

For twenty three summers I’ve swum across this quiet lake, my black-and white-haired head low in the water, like them. Often, they glide beside me. And if I get too close, they shoot away underwater. We understand each other. At least that’s what I used to think - before the Attack.

The loons usually nest in a remote cove, protected by warning signs. And all summer, they steer clear of the part of the lake that’s noisy with cannon-balling kids and rock music. This year, though, the birds have been hanging around the small beach where I swim. It’s remote, but apparently not remote enough.

So one cloudy evening, I’m swimming back, about a hundred yards from shore, thinking about supper, when I hear screeches. Ahead of me, a loon is hydroplaning madly across the water. I think: I’ve seen this before – an adult teaching a chick to take flight; the mother encouraging the child like a soccer mom cheering her kid as he zigzags toward a goal.

Then I wonder: could the shrieks be warnings? Is the chick fleeing? From me? The screams become tremolos. The tremolos get louder. And now Mama is here. Six feet from me. She rears up, belly plump and white, feet standing on the waves. Huge.

I’m a good swimmer. But compared to this seaplane, this torpedo, I’m an inert buoy. She leaps and plunges, never leaving me, wings flapping, beak aloft. And oh, that beak. I can just imagine it drilling into my skull.

Only minutes before, this had been my companion, sharing my spring-fed sanctuary. But now I know it’s not my sanctuary. It’s hers. And I’m about to lose my guest privileges.

Loons laugh, we say. Right. To this one, I’m laughable. Puny.

When I get home, I Google “Loons attack humans” and find YouTube accounts of aggressive loons attacking boats and cormorants. Thankfully, there’s no documentation of a loon harming a person. Then again, it would be hard to hold a videocam while being pecked to death by an immense bird.

Watching our cat devour a mouse, I’ve often thought of a line from Tennyson: “Nature, red in tooth and claw.”

Tennyson’s poem speaks of humankind, “Who trusted God was love indeed/ And love Creation’s final law.” But savage nature, the poet says, “shrieks against his creed.” Predation and survival are nature’s way.

That bird attacked me out of maternal instinct, yes. But I wouldn’t call it love. And I have instincts too. For the rest of the summer I took another route across Nichols Pond.

I’ll keep loving the loons, but from a distance – the vast distance between human and bird. 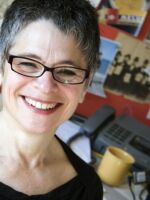 Judith Levine
Hardwick resident Judith Levine is an award-winner author and a columnist for Seven Days.
See stories by Judith Levine
Subscribe To 'The Frequency,' Our Daily Morning Newsletter
Get up to speed on the news Vermont is talking about, delivered to your inbox every weekday morning.
Sign Up