As I often do when we decorate for a holiday, I climbed a ladder the other day and hung our big American flag above our barn door.

The flag looks faded by now. But it flaps in a stiff autumn wind that reminds me how fortunate I am to live where I do, here in Vermont.

A while ago, I began to wonder why the same star-spangled banner sets my teeth so much on edge when I see it displayed as a glossy lapel pin by so many politicians.

And I’ve concluded that’s because, to me, this patriotic bling has borrowed, or stolen, the valor of those who most deserve to wear it.

According to an eloquent book, titled “Those Who Have Borne the Battle,” forty two million Americans have served during our nation’s wars, starting with our own revolution.

The book’s author, James Wright, joined the Marines when he was just seventeen. He went on to become a president of Dartmouth. Now retired, he has been visiting hospitals since 2006 to counsel many veterans wounded in Iraq and Afghanistan about going to college.

In his history of America’s wars and those who fought them, Wright notes that twenty three and a half million veterans are still alive.

I’m one of those who got called up and sent off to Korea for thirteen months, as a young rifle platoon leader. I bonded with total strangers over our gripes with Army life that no civilians back home would understand – unless they had served themselves. I missed those buddies when I took off my jump boots and went back to school.

But the draft that swept so many of us into the military ended forty years ago. The task of defending our country was dumped on a professional army and the burden since has not been equally shared. Today, says Wright, only half of one percent of the American population is serving in the armed forces.

Our latest veterans – more than two million – have returned from Iraq and Afghanistan with little to show for their gallantry beyond the stress of repeated deployments, as often as seven times, while the rest of the country looked elsewhere.

These vets are invisible even to each other, as they struggle against new enemies, from joblessness to traumatic brain injury and the usual red tape.

James Wright proposed a sensible idea: that Congress should not authorize any war that is not paid up front with surcharges on corporate and income taxes to cover the operating costs. These should include a trust fund to help vets in need who have served and sacrificed.

I would salute that.

In the meantime, I’d like to see those lapel flags reserved for vets returning from unpopular wars as they struggle to readjust.

For all the flag-waving, we haven’t given them a proper welcome home.

It’s time to recognize, at a glance, our veterans, and their families, who bear a burden off the battlefield that the rest of us cannot begin to imagine. 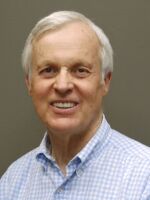 Chris Wren
Chris Wren is a former reporter and editor for the New York Times. He was chief of its foreign news bureaus in Moscow, Cairo, Beijing, Ottawa and Johannesburg. He now lives in Thetford.
See stories by Chris Wren
Subscribe To 'The Frequency,' Our Daily Morning Newsletter
Get up to speed on the news Vermont is talking about, delivered to your inbox every weekday morning.
Sign Up