Andrew Harris, University of Vermont class of 1838, was the first black college graduate in the United States to demand, not only an end to slavery, but full equality for people of color. That made him one of the most radical and uncompromising reformers in America. Called “the most educated colored man in our country” by the anti-slavery newspaper The Liberator, Harris became a leading black intellectual before he had been out of UVM a year. Forgotten for 175 years, he is unknown today. But it’s high time to bring him out of the shadows.

Harris arrived in Burlington from Cayuga, New York in November 1835, determined to get an education. He had already been rejected by both Union and Middlebury colleges due to his race. At UVM Harris also faced discrimination. The twenty-three other students in his class initially refused to attend classes with him. At the end of their years together they refused to graduate with him. And the administration gave in.

The Liberator tells the story: “Mr. Harris, a colored man, who was a member of the graduating class, was not permitted to speak or to come upon the platform to receive his diploma, but was obliged to take it one side. The class declared that if he came upon the stage, they would have nothing to do with the exercises.”

But Harris refused to be discouraged. Less than two weeks after graduation he went to New York and Philadelphia, where he met a series of leading reformers, spoke to reform meetings and preached in churches.

A compelling orator, Harris was a featured speaker at the next national meeting of the American Anti-Slavery Society, held in New York in May, 1839. His subject was not slavery, but the “poison” of racism, which he said slavery spread in the North as well as the South. By way of illustration, he told the assembled delegates that he had been forced to ride to the meeting in a railroad boxcar.

By the spring of 1839 he had moved to Philadelphia, which had the largest black community in the free states. There, for the next two and a half years, he engaged in a whirlwind of religious, anti-slavery and reform activities. He also took up politics, helping to found the anti-slavery Liberty Party in 1840.

Then, suddenly, in December 1841, he died of fever. He was only 27. “We consider it criminal in the sight of God and man,” he said a few months before his death, “silently to submit to our indignities, or suffer them to be transmitted to posterity.” It’s a fitting epitaph.

The University of Vermont first discriminated against, then ignored, and then forgot Harris – when he should be listed among its most distinguished graduates. There’s no memorial of any kind for him on campus. But now that we know who he was - there’s really no more excuse. 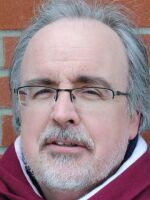 Kevin Thornton
Kevin Thornton is an historian and filmmaker from Brandon. His current project is about mourning and Civil War memory in Vermont.
See stories by Kevin Thornton
Subscribe To 'The Frequency,' Our Daily Morning Newsletter
Get up to speed on the news Vermont is talking about, delivered to your inbox every weekday morning.
Sign Up