It’s Black History Month, an important time for reminders about the history and people of our country. While many schools and organizations make sure to include programming to celebrate it, it’s often a month when reminders about Black history and culture get packaged into a few weeks, then perhaps get put aside for the rest of the year.

I’ve been living and working in England quite a bit in recent years, and it’s been a refreshing and startling reminder about how much we’ve come to take for granted our own American history and accomplishments. England has a Black history month too, in the autumn.

At that time there are reminders about Britain’s slave past and abolition, and celebrations of more recent immigrant populations from the West Indies and Africa.

But I had forgotten how little the British may know and understand about America’s long struggles with race - and how much we may ourselves have forgotten as well.

Two years ago I was teaching a course on African American literature at a London university.

My students came from many backgrounds. There were mature students returning to university study; young white British students; young Black men and women; Muslim students and international students. The class filled immediately, because it offered something rarely available to them.

We began in a usual way, reading and discussing novels I had been lecturing on, like Native Son and the students all seemed engaged.

But it quickly became clear that for every close reading of a page or chapter, I needed to pause and fill in background – about what it was like to have a long shared history of slavery and segregation on one’s own soil, and what the Civil Rights Movement really was about.

So one day I put aside my lectures and instead put on a DVD of two of the episodes of the American television documentary series, “Eyes on the Prize.”

The prize-winning program, which first aired in 1987, showed in film footage and interviews the crucial landmarks of 1960s black history.

For the first time in their lives my non-American students saw the bus boycott in Montgomery, freedom schools, and the courage of those who sat at the segregated Woolworth’s lunch counters, spat upon and taunted.

They saw for the first time the Freedom Riders - brave young black and white college students. Their bus rides throughout the Deep South ended with the horrific murders of James Chaney, Andrew Goodman, and Michael Schwerner.

They saw university students, just like them, who joined hands to force change. My students’ eyes were wide, their mouths open, as they watched in silence.

When the film was over I turned on the lights and asked, “How many of you could have done that?”

Every hand in the room went up. 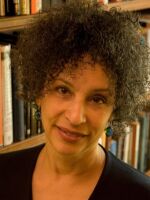