Martha Wood Belcher’s career as an artist spanned two centuries and two continents. She fulfilled the traditional roles of mother, sister, daughter and wife, as well as what is usually considered to be the more contemporary role of an equal financial partner with her husband in supporting - through the sale of her artwork - her mother, sisters and children.

Martha was born in England in 1844, and immigrated to the US with her family. But soon after their arrival, the death of her father left his wife and 3 daughters with limited resources. The women took in laundry and sewing, and Martha sold landscapes of the local terrain, which caught the eye of a Major Brooks from New York, who became her patron. He made it possible for her to study art at the Cooper Institute in New York, including a two year tour of Europe, during which she studied in Dresden and Munich.

In her 30's, she returned to the US to teach art at Ripley College in Poultney. She settled in Pittsford, where she designed and built a house on Main Street.

Ironically, after the death of her husband, her mother and both sisters, Martha inherited a large sum of money from a relative in England. This allowed her to live without financial concerns for the rest of her life, and to support the art education of her daughter Hilda – who was born in Pittsford in 1881, and was educated in New Jersey, New York and Italy.

Hilda became one of the country's leading portrait painters in both oil and watercolor.

Hilda made her living by selling illustrations and cartoons to magazines such as Harper's and Women's Home Companion.

She was recipient of many prizes and commissions. When she won the coveted Strathmore Watercolor Prize, the New York Times wrote "Girl Painter Wins Prize from 692 Men Competitors." She was the second woman elected to the National Academy of Design. In 1936, the New York Times called her "one of the most distinguished women artists in America."

Travel was high on Hilda's agenda. She always painted when she traveled, and of particular note was her tour of Europe with her mother, shortly before World War I.

Though ill health eventually forced her to settle in New Jersey with her brother, she continued to return to the family home in Pittsford every summer. There, volumes of studies of her feline companions give witness to the humor and tenderness remembered by her Pittsford relatives to this day.

Toward the end of her life, Middlebury College awarded Hilda Belcher an Honorary Degree, reflecting her assertion that she had "always felt herself a thorough-going Vermonter." 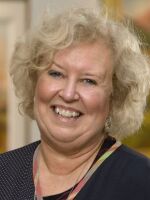 Mickey Myers
Vermont artist Mickey Myers of Johnson has been the Executive Director of Bryan Memorial Gallery in Jeffersonville since 2006. Before that, she was Executive Director at Helen Day Art Center in Stowe.
See stories by Mickey Myers
Subscribe To 'The Frequency,' Our Daily Morning Newsletter
Get up to speed on the news Vermont is talking about, delivered to your inbox every weekday morning.
Sign Up