Strolling through the State House in Montpelier , looking at the many portraits of governors, legislators, and other notable Vermonters on its walls, it wouldn’t take anyone too long to notice a theme – with a few exceptions, including Governor Madeleine Kunin, they mostly represent men. But at the top of the stairs, right before the entrance to the Senate chamber, there’s one portrait of a woman that really stands out.

It’s the one of Edna Beard, the first woman elected to the Vermont legislature. She was elected to the House of Representatives in 1921, right on the heels of the 19th amendment to the United States constitution, granting women the right to vote. This painting is especially distinctive because it not only portrays a woman; it’s also the work of a woman artist.

Ruth Mould, the painter, was born in Morrisville in 1894, and was professionally trained at the Institute of Art in St Paul, Minnesota, and at the Art Students League in New York City.

Back in Vermont, she taught art to students at the Johnson Normal School, in the Montpelier school system, and also to countless women in the Central Vermont area who were eager to have a professional steer them in their hobby. Ruth and her family lived in many towns in Vermont, and in every spot she kept a dedicated studio for her own work, which allowed her to hone her skills. Her efforts were rewarded when she was chosen as one of two artists whose work represented the state of Vermont in the 1939 World’s Fair in New York.

She’s best known, however, for her oil portraits. Three of them, all of Vermont Chief Justices, hang in the Vermont Supreme Court building today. Her portraits were recognized for being true likenesses and revealing great strength of character. It’s quite likely that this strength of character was evident to Mould in the face of Edna Beard, who followed up her stint as the first woman in the Vermont House by winning an election as the first woman in the Vermont Senate. Beard needed to be strong to break the gender barrier in the state house and to go on to pass legislation that provided child support to women whose husbands were incapacitated - and that made it possible for women to be hired as sheriff’s deputies.

Every March, the worldwide observance of Women‘s History Month reminds me of the debt we owe to all who paved the way for women’s accomplishments in Vermont and everywhere. I feel privileged to work for the Vermont Commission on Women, an organization that turns 50 this year, and I’m grateful every day for the strength of character in the women and men who have been working for much longer than that to ensure that women’s art, women’s leadership, and indeed all of women’s work is celebrated and awarded the recognition it has earned.

Images accompanying this commentary are from the collection of the Vermont Historical Society. 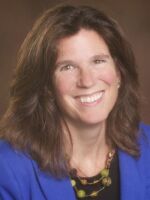 Cary Brown
Cary Brown is Executive Director of the Vermont Commission on Women, an independent state agency dedicated to advancing rights and opportunities for women in Vermont. Prior to becoming Executive Director, she served two terms as a VCW commissioner, worked as the Director of Girls’ Programs for Vermont Works for Women, and directed the Women in Technology Project at Vermont Technical College. Ms. Brown received a bachelor’s degree from Haverford College, and a Master’s of Public Administration from Norwich University.
See stories by Cary Brown
Subscribe To 'The Frequency,' Our Daily Morning Newsletter
Get up to speed on the news Vermont is talking about, delivered to your inbox every weekday morning.
Sign Up