It’s summer in Vermont and I should turn off the laptop, put away the iphone and 'just say no' to the cable company. But I can’t do it, because I have serious, well advanced, World Cup soccer fever.

Long before the games even started I watch ed World Cup commercials on Youtube. They’re brilliant. Of course they are. You bring in marketing genius when you’re aiming at the biggest market on earth.

Then I tuned in to the opening game, Brazil against Croatia - and realized then how old I am. I wasn’t checking out the young men but was thinking, ‘those boys look nervous’ and wondering if they’d gotten enough sleep and if their anxious parents were watching.

Also, I made an important note to file, “don’t watch World Cup while using the rowing machine. It doesn’t work when you throw your hands up in the air.” I am a learner.

And World Cup fever is contagious. Crowds gathered around the country to cheer on Team USA. The American workplace was overtaken by buzzing cell phones, apps with scoring updates and gatherings to watch THE BIG game, and then the next big one.

When I was growing up in Norwich, we played soccer a lot, but it was hard to come by on TV. PBS aired black and white footage of the German leagues and t hat was about it. Now, I can even watch highlights in a boat, on a lake.

It’s wonderful that so much of America is learning to love soccer and that technology lets us watch, or listen, almost anywhere. I’ve discovered that I feel deeply connected to the rest of humanity when watching the World Cup.

When stars Neymar, Ronaldo, or Messi put the ball in to the back of the net, I swear I can feel hearts rising or falling around this planet earth - that tectonic plates shift ever so slightly when an entire nation jumps for joy.

An American columnist recently declared that there are no MVPs in soccer. But surely she’s heard of Brazilian stars “Hulk” or “Fred” – or at least “Pele”. Pretty much every national team has a transcendent star.

Player Lionel Messi’s talent is so profound that one observer has declared that Messi is actually from Jupiter. And this would explain a lot. But I’m pretty sure Argentina would still claim him as their own - they love him.

I still spend time outside and watch the clouds roll through an azure sky… at half time. But I like being tethered. During the World Cup, my network is the globe.

The final is on Sunday the 13th . After that, I’ll turn off the laptop and the phone and pick up a book. My youngest brother gave it to me. It’s called, “How Soccer Explains the World.” 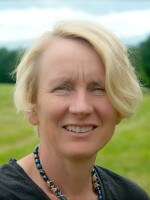