We’ve entered into the High Holy Days for Tag Sales, Lawn Sales and Garage Sales, which runs right up until Labor Day. Every weekend, our neighbors bedeck their lawns with their unwanted items for us to inspect and take home for a song: exercise equipment, toys and children’s clothes, kitchen ware, and an occasional treasure. (Visitors from other countries always are perplexed, charmed, and delighted by this tradition). Most of us slow down, at least, when we drive by.

Sometimes a tag sale treasure is not immediately apparent. That’s the case with one piece of sheet music, “Pray for Peace” by Arwin Garrelick and her husband that showed up in a milk crate of mouse-eaten papers on a suburban lawn a few years ago. The publisher was listed as Music Mission for Peace, Inc, Montpelier, Vermont. I got curious.

Thanks to the internet, I was able to find the remaining members of her family and ask about Arwin. What a story! She was born in Richford, and with her husband, raised her children and ran a dairy farm, but in her spare time wrote poetry which she often read for Grange events. When her husband died unexpectedly, she moved to Montpelier, finished her GED and worked at the library, still writing poetry. Then, Jack Garrelick, a disabled veteran at a VA hospital in Mississipi posted an ad looking for a collaborator on a song project for peace. Although she was at first suspicious of a “song shark” con, Arwin responded, and after a visit by Jack to Montpelier and many letters back and forth, they fell in love, married, and, from their home on East State Street in Montpelier, began the Music Mission for Peace in 1964, which they also called their Bedside Peace Corps.

Arwin left each day’s effort on the breakfast table as she left for work at the library around the corner. Jack wrote a tune ready for her by dinnertime, and after editing they printed the song and sent it to world leaders. They received as gifts from these world leaders 28 rare instruments, a lute from Anwar Sadat, a shofar from Golda Meir, and an ancient flute that was hand-delivered by the Ambassador from Thailand, who arrived in Montpelier by private plane in 1966 to meet them. Hubert Humphrey wrote, “I wish I had an army of people with your ideals.” Yet their story has been forgotten.

One song, Forward Together, written for the 1976 Bicentenniel, made its way to the Vermont History Center in Barre. But most of the songs ended up in family member’s attics and at that tag sale. I find the story of Arwin Garrelick especially inspiring because from her little corner of Vermont she used her talents to work for peace, believing that if people all put their minds to peace, it would really happen. In those Cold War days, she walked to the post office and sent songs around the world, hoping that the universal language of music would make a difference. 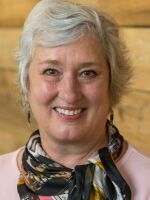 Linda Radtke
Linda Radtke, the host of the VPR Choral Hour, has spent a lot of time through the years in the VPR studio singing with Counterpoint and other choral ensembles, volunteering for pledge drives, and recording for the commentary series.
See stories by Linda Radtke
Subscribe To 'The Frequency,' Our Daily Morning Newsletter
Get up to speed on the news Vermont is talking about, delivered to your inbox every weekday morning.
Sign Up