After having spent years forcing my younger sister to play student with me as the teacher, it came as no surprise to my family when I decided to go to law school to become a professor. I was so excited when I finally got to meet with the faculty advisor for those of us who wanted to teach. For now, I’ll just call him Professor Kingsfield, for reasons that will become apparent.

Now, it was bad enough that Professor Kingsfield said this to me, but what was worse was that I believed him. For a good long while, I tried to shift gears, and I started making all sorts of regrettable decisions.  I passed on key opportunities, made not-so-smart personal choices, and even practiced law for a while. I was a terrible lawyer. I even passed out once in court.

Thank goodness something deep inside me inched me back to a teaching career.

A few years later, I saw Professor Kingsfield at an alumni reception.  He read my nametag and extended his hand.  “Professor Cheryl Hanna?  So pleased to meet you!  I just read your article in the law review and it’s very brave. You’re the kind of alum that makes us very proud.”

And so, fueled by youthful self-righteous indignation and fortified by three glasses of cheap reception wine, I looked him straight in the eye and said.... Well, I can’t repeat what I said. But I made clear in language as colorful as possible that he almost ruined my life and had no business advising students.  He stood there in shock as my friends dragged me way.

In my more sober moments, I do try to give him the benefit of doubt. I was a young woman, and not from a prominent family or an Ivy League college. I expect that he never known a professor quite like me.  He likely had limited ideas of what a lawyer should look like – even though I was standing right there, in plain sight.

Which is why I constantly try hard to look beyond what I think is the obvious in my own students, to see them as they one day hope to see themselves.

This commentary was recorded at a VPR event in May, and was aired posthumously on VPR's Vermont Edition on July 29, 2014. 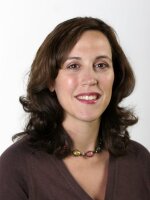