In his office in Shelburne VT, Bill Ryerson, founder and president of Population Media Center or PMC is unassuming, as he jokes about a foot-high stack of folders on his desk he still needs to deal with at the end of the day, before resuming a relentless travel schedule.

(Ryerson) Well, next week I will be in Washington DC speaking at the International Best Practices Meeting. The following day I’m speaking at the Inter-American Development Bank and have several other meetings. Then I fly to Ethiopia. I’ll spend nine days there with our country representative, meeting with donor agencies like UN agencies and embassies, to seek their support for what we hope will be our ninth program on Radio Ethiopia.

He’s pitching soap opera as one of the most powerful catalysts for social change. Ryerson has worked in more than 50 countries using the power of entertainment media to shift behavior patterns. PMC’s popular radio and TV serial dramas with compelling characters as role models, have led to significant change in both attitude and actions

He says focusing on the world’s population issues also has impact on broader world issues.

(Ryerson) Our primary achievement is we’ve taken a health communication strategy that automatically goes to scale on a national level, and we’ve now started spreading this methodology across the planet in a way that we could affect dramatically the future sustainability of this planet and hopefully make this the human enterprise more sustainable and help people live healthier and economically better lives as a result.

That methodology uses story and character development to help audience members understand a variety of life choices. Each program is designed and written in local languages by local people, based on the policies, issues and cultural realities of that country.

(Ryerson) We never tell people what to do. We model behaviors and show realistic consequences. So indeed, if we were showing unrealistic consequences or pushing an agenda telling the audience “Do this, don’t do that,” which is what most of health messaging is, we could be accused of being manipulative. But instead we’re modeling behavior, good and bad, and showing the consequences, and the audience is deciding whether or not to emulate the characters in our program.

Despite confronting skepticism about the impact of media, statistics clearly show that these programs are making significant strides toward positive change in some of the world’s neediest countries as well as in the US. After Ethiopia, Ryerson, who is also CEO of the Population Institute in Washington, DC, spent a week in Uganda to start a new project and a few days with a PMC team in Rwanda before heading back home. 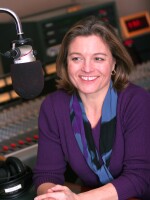 Fran Stoddard
Fran Stoddard was the co-host of Switchboard.
See stories by Fran Stoddard
Subscribe To 'The Frequency,' Our Daily Morning Newsletter
Get up to speed on the news Vermont is talking about, delivered to your inbox every weekday morning.
Sign Up