I noticed not long after moving to Morrisville that the town has a thing for the colors green and yellow. The school colors of People’s Academy - or PA, as it’s better known - are green and gold, though the gold is really more like yellow. And for as long as anyone can remember the Morrisville Water & Light department has sported a green and yellow logo on its trucks and equipment. Same for its offices and the signs outside the town clerk and the sporting goods store.

In fact, there’s enough yellow and green around town to give the impression that Morrisville endorses an official color scheme. Morrisville isn’t like Chicago, with an official flag - though I’d like to see one - and it isn’t like Greensboro, Vermont’s tradition of restricting village houses to green and white, a holdover to old ideas about Greek Revival architecture.

It’s more unconscious than that.

During my first spring in Morrisville, I discovered a Water & Light truck magnet exposed by the melting snow along the roadside. About the size of a small yellow and green pizza, it has since that day been prominently displayed on my refrigerator, where it lends my kitchen décor a certain Morrisville aesthetic that visiting neighbors envy.

It’s an exciting time to live in Morrisville. A citizens’ group celebrates the downtown, and this past summer saw the renovation of some landmark buildings. The old Arthur’s department store has been renovated into low-income apartments and storefront spaces. The exterior color selection - mustard yellow walls with forest green window trim - didn’t sit well with everyone in town. One hyperbolic Front Porch Forum user decried the “mustard-izing” of Morrisville and later compared the yellow to the contents of a baby’s diaper. I was surprised that no one pointed out what to me seemed obvious: that intentional or not, those are Morrisville’s unofficial-official colors.

And thus began what I call the “green-and-golding renaissance” of Morrisville village.

The local BBQ place followed suit with an eye-popping paint job in green and yellow reminiscent of a John Deere tractor. Meanwhile, the renovation of the old storefront that sits next to the town offices features bright yellow walls and dark green trim that give off a decidedly Morrisville vibe. As our town clerk said to me, “Now that you mention it, it is everywhere!”

But not everyone in town is convinced of my color theory, and I may be predisposed to see history and tradition in current events. But I’ve read about some notable examples, like the time when green and gold decorated downtown businesses and residences for the 1930 commencement, or when the entire village was bedecked with those colors for the PA centennial in 1947.

Because of Morrisville, I’ll never experience Robert Frost’s poetic tension between the fleeting quality of gold and the lingering of green. Because I only need to look out my window toward my neighbors’, who have begun painting their house in - green and yellow of course. What else? 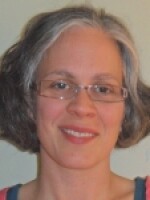