When I stepped off the plane into the sweet, hot air at the Jose Marti airport in Havana last spring, I felt as if I had spanned decades of history and cultural differences.
Vintage 1950’s American cars zoomed down crowded streets and propaganda posters celebrating heroes of the Cuban Revolution evoked images of the Cold War. But while the country was brimming with relics from the last century, some American goods could be seen and some Cubans I met mentioned U.S. exchange projects like Senator Leahy’s “ice cream diplomacy” and former Lieutenant Governor Brian Dubie’s 2004 trip that resulted in Vermont apples and heifers being sent to Cuba. I was treated as a friend.

We took very little on our plane but I saw Cuban-Americans arriving with many gifts, from sunglasses and DVDs to flat-screen televisions. A few even brought fresh hot coffee and crullers to share with family members at the airport.

I went to Cuba with the intention of reporting on the underground tattoo scene. Che Alejandro, the godfather of Cuban tattoos, told me that he craves something else from America: tattoo magazines, ink, and needles.

“Right now there are only a few people bringing tattoo supplies to us,” Alejandro said. “I can’t get a license to import them, so people bring little things in their luggage and sell them to me.”

Tattoos have long been taboo in Cuba, but the recent emergence of a large-scale distinctly Cuban tattoo culture is a vivid example of cultural change . As recently as a few years ago, tattooed Cubans were not permitted on beaches and there are unofficial rules against employing tattooed people. Tattooed Cubans reportedly can’t work in the airport.

But as tattoos proliferate, the stigma fades. And along the sun-soaked streets of Havana, I found it hard to walk a single block without spotting tattoos on every type of body and in all sizes and styles.

As Cuba opens up to America, I hope that Cubans will enjoy more economic and political freedoms – and that my friend Che Alejandro can conduct his tattoo business openly. I also hope that big transnational companies won’t overwhelm the island and what is so particular about it. Because Cuba has a rich history that I believe should remain intact – and can even show us a few things that are worth knowing about our neighbors to the south. 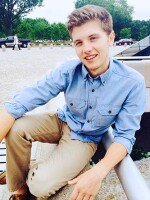 Jasper Craven
Jasper Craven is a senior at Boston University where he is working for a dual degree journalism and political science. Special appointments include city editor, BU Daily Free Press (2013); six-month Boston Globe fellowship (2013); internship, U.S. Senate Judiciary Committee (2012); and bi-weekly columnist, Caledonian Record, St. Johnsbury (2006-10). During the summer of 2014 he worked as Washington correspondent for the Times-Argus and Rutland Herald.
See stories by Jasper Craven
Subscribe To 'The Frequency,' Our Daily Morning Newsletter
Get up to speed on the news Vermont is talking about, delivered to your inbox every weekday morning.
Sign Up