The storm has left mounds of ice, heaps of slush, with bare patches in between. It more than justifies the ‘hazardous’ warning for driving, walking and generally any outdoors activity. So in White River Junction, I’m glad to get onto the train, where it feels warm, cozy, and downright normal.For a year now, I’ve been commuting on the Amtrak Vermonter from Burlington. I work two days at my office in Hanover, spend the night nearby at a friend’s house, then go back to Burlington. When I tell people I commute to work on the train, I get a look of surprise and delight. “The train?” they say. Even people who have lived in Vermont all their lives admit they’ve never thought about train commuting. And, almost universally, the next comment I get is “I love the train.” As do I.

This stormy evening, all is dark outside, and quiet. The little towns we pass through are laden with icy snow, as if the whole town - buildings, streets, trees, cars, everything - has been covered with a layer of thick and heavy frosting. Streetlights illuminate seemingly empty villages in sparkling, glowing silence.

We slow down. The conductor says the switcher must clear snow off the tracks. And he warns us that there are tree branches overhanging the tracks, so we may hear some rustling noises as they scrape the train.

Okay, I think, no big deal, and continue reading my novel. Suddenly I hear a loud crackling noise, as if giant trees are beating at the windows with a mighty force - not the soft brushing of branches over the top of the train as I had imagined.

At the same time, the novel I’ve been enjoying for its interesting characters, setting and clever plot turns into a thriller in which the heroine is threatened with being thrown into the icy waters of the Bering Strait! Terror, I think. Disaster!

As the trees snap and bash the train, I move from the window to an aisle seat.

The train slows and stops, but the conductor assures us that we’ll start up again soon. And we do.

Before long, we arrive safely at the station in Essex Junction where my husband is waiting and the only challenge we face now is the partially-plowed road ahead - between station and home. 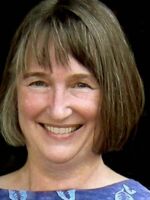 Nancy Kilgore
Nancy Kilgore is a writer, psychotherapist, and former interim parish pastor who lives in Burlington. Seven Days called her award-winning novel, Sea Level, “vibrant” and “evocative."
See stories by Nancy Kilgore
Subscribe To 'The Frequency,' Our Daily Morning Newsletter
Get up to speed on the news Vermont is talking about, delivered to your inbox every weekday morning.
Sign Up