Back when the General Assembly convened at the beginning of the year, I expressed the hope that each measure presented during the session would be critically judged by whether or not it would improve Vermont’s economic and fiscal health.

After last November’s election in which a governor barely squeaked in against an unknown and underfunded challenger and more Republican seats were regained in the House, I was among the many Vermonters that assumed those chosen to serve had heard the voters and understood their displeasure with the state’s direction.

But while policymakers claim to have closed a huge, hundred-million dollar budget gap, General Fund expenditures rose by more than 4%, above inflation and far more than the rise in most Vermonters’ paychecks. Only in the political world can a substantial increase in spending be labeled a cut.

Numerous taxes were raised. Legislators distracted us by discussing which taxes to hike, while the real debate should have been whether any were needed at all. Vermont’s tax burden is consistently ranked among the highest in the country and our business climate nearly the least favorable; we don’t need to make it any worse.

And unfortunately it has been getting worse. The state Labor Department reports that Vermont has nearly 3000 fewer jobs today than we had 4 years ago and that our workforce has shrunk by more than 11,000! That means that more Vermonters have given up looking for work, retired early or moved somewhere else.

And this is during a period of recovery when employers nationwide have created millions of jobs.

So why has Vermont been left behind?

Demography plays a key role: we’re the 2nd oldest state, we have the 2nd lowest birthrate and our school-age population is declining. In addition, regrettably, folks are leaving; in recent years more people have moved from Vermont to another state than have come to live here.

I once suggested that we face a crisis of affordability – and it’s still with us. People will act in their own best interests. If there’s a job available and a house that fits their budget, that’s where they’ll live. If not, they’ll seek a greener pasture. Clean air and natural beauty only go so far; folks need to pay their bills.

Some politicians demonize those who’ve been successful. But they’re often the ones among us who’ve created jobs for others. And they’re also the ones with the greatest flexibility to move away.

Vermonters need to deliver the message of affordability more clearly. Our future depends on it. 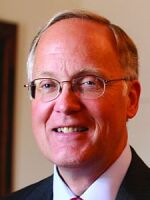