Last month I attended the annual meeting of State Business Roundtable Executives, hosted by the Washington Business Roundtable in Seattle. It offered a welcome opportunity to network, learn, and engage in policy discussions mainly around education and economic development. Most memorably, the ways in which businesses were mobilizing to address educational achievement gaps and improve post-secondary aspirations were front and center during site visits to both Microsoft and Boeing.
To say the Washington state economy is white-hot is not hyperbole. Seattle locals complain mightily about the paralyzing traffic tie-ups, due largely to the commutes of heavy workforces from the area’s Top Five employers - Boeing, Microsoft, University of Washington, Amazon, and Weyerhaeuser - which represent 160,000 workers. But, with substantial amounts of tax revenue flowing in, the state is now building out the area’s roads, train lines, and ferry landings at a blistering pace. Business is, indeed, good in the state of Washington.

At Microsoft (40,000 workers), we toured the Cybersecurity Center. Their ability to protect customers from the bad guys is limited by their own talent pool – and they can’t get enough of the right kind of computer scientists. So, Microsoft is funding, at the rate of $25 million each year, the development of computer science instruction at the secondary level in order to grow the number of computer science majors in our country’s colleges and universities.

At Boeing (70,000 workers), we walked around the world’s largest free-standing building (400 plus million square feet), which houses the construction of various aircraft for commercial and military purposes. It must hire 6,000 new workers every year just to keep up with the backlog of planes on order. And, while they hope to hire as many engineering graduates as possible, what they really want are welders, plumbers, and electricians that actually build the planes. In this case, Boeing is making it financially possible for workers to get the necessary credentialing, training and retraining at the area’s community or technical colleges, or go on for advanced degrees.

So, while the scale of my trip to the Great Northwest was mind boggling, the basic message was eerily familiar. No matter the size of the company, competitiveness can’t be sustained without the constant replenishment of its human capital. Companies in Vermont may not have $25 million to invest in high school computer science courses, but we can and must engage more actively with middle and high school students to create awareness of and aspirations toward post-secondary education and the world of work beyond school. 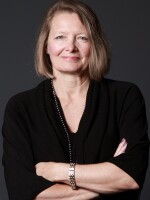 Lisa Ventriss
Lisa Ventriss is President of the Vermont Business Roundtable, which seeks to inform and engage the public on the State’s most complex policy issues. She summers on Lake Dunmore where she enjoys the varied activities that surround her husband, three sons, and her delightful canine companion, Miss Savannah.
See stories by Lisa Ventriss
Subscribe To 'The Frequency,' Our Daily Morning Newsletter
Get up to speed on the news Vermont is talking about, delivered to your inbox every weekday morning.
Sign Up