Pappas: May The Force

I was raised by my grandparents. It was a great childhood, with neighborhood friends who often congregated at our old farm to enjoy hours of games and adventures. Whether it was around the kitchen table playing Sorry; running through the woods; or swimming in the pond, that kid in me lived large.

Then, when I was 10, my grandmother died in my arms. And it was devastating for my family and me. But kids are resilient. While I was still reeling from the grief, I filled the void with Star Wars. The blockbuster had been released just months before and I let it consume me.

No one had ever seen such a mash-up: huge star ships, robot sidekicks, an oversized Bigfoot-like creature, a menacing villain all in black, lighted swords, and a cantina full of aliens. It was kid Nirvana.

Not only did I obsess about those characters with notebooks filled with doodles, I collected the trading cards, and a schoolmate and I even recorded audiotapes of Star Wars quizzes designed to stump our friends. At one point, we even attempted our own Star Wars movie on eight-millimeter film, with crude models, painted backdrops, and our own crude special effects.

Somewhere deep in that obsession, a door closed – the one with the bionic man, Monopoly and Risk. A new door had opened – the Millennium Falcon was in a climbing tree; the pond was the trash compactor from which we had to escape; sticks were light sabers; blasters fired lasers not bullets; the first video games were based in outer space; and every movie we saw started to have special effects that got so good over time, we could no longer determine what was real.

Star Wars changed how we played, how we were entertained, and even how we related to one another as kids. It reprogrammed my generation.

Because of the profound loss I suffered as a boy, I grew up keenly aware of any moments of excitement and happiness. And despite my grief, I look back on those formative years very fondly. The core values of Star Wars were a cloak around me; the friendships bound to its morals have lasted for decades; and its influence on me lighted some of my darkest hours.

The Force was with me then, and I’ll be grateful for it always. 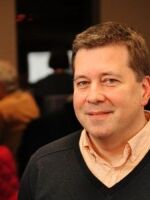 Steven Pappas
Steven Pappas is Editor of the Times-Argus in Barre Vermont.
See stories by Steven Pappas
Subscribe To 'The Frequency,' Our Daily Morning Newsletter
Get up to speed on the news Vermont is talking about, delivered to your inbox every weekday morning.
Sign Up