There were no women present that March day in Burlington in 1910, when the Green Mountain Club - and with it the Long Trail - was born.

But if there were no founding mothers, the 23 male founders had girl friends, sisters, wives, and daughters who would not be kept out of the woods or off the mountain tops.

And when club members began to clear a pathway for the Long Trail, women were there. We see them in old photographs dressed in knickers, tall lace-up boots, hair tied up in bandannas, and carrying tools.

One early trail worker was Katherine Monroe, a younger sister of Will Monroe, famous for laying out the most scenic section of the Long Trail. Born in 1873 in Pennsylvania, Katherine attended Barnard College, lived in Europe for several years, and studied French. When her brother retired, she moved with him to the Callahan Farm in Duxbury under Camel’s Hump, at 1,400 feet, at the end of a long dirt road. She’s buried near the trailhead to Camel’s Hump, next to Scottie, her favorite collie.

Long before the Long Trail was completed in 1930, women went on long-distance hikes. Most famous were the so-called Three Musketeers: Catherine Robbins, Hilda Kurth, and Kathleen Norris. They created a national sensation in 1927, when they walked from Massachusetts to Canada - without firearms and male escorts! - as one headline shouted.

There are many remarkable women in Green Mountain Club history. An early member of the Burlington chapter gave name to a side trail on Mount Mansfield, the Laura Cowles Trail. Cowles was born in 1878 and was an athletic year-round hiker who scaled the six highest peaks in Vermont. The Minerva Hinchey Shelter near Clarendon, is named for the petite woman who single-handedly ran the club office from Rutland for 22 years.

As early as 1916, the Burlington chapter elected a woman president, and women have held - and hold - numerous local offices. It took longer for women to join the board of trustees, and it wasn’t until 1969 that the club elected its first woman president, Shirley Strong. Today, three of the five most recent presidents are women.

For a 100 years, women have helped build, maintain, and protect that famous Footpath in the Wilderness - the Long Trail. 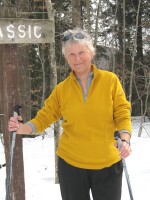 Reidun Nuquist
Reidun Dahle Nuquist is a longtime member of the Green Mountain Club who writes frequently on the history of the Long Trail. A Montpelier resident, she was a librarian at the Vermont Historical Society and the University of Vermont’s Bailey/Howe Library.
See stories by Reidun Nuquist
Subscribe To 'The Frequency,' Our Daily Morning Newsletter
Get up to speed on the news Vermont is talking about, delivered to your inbox every weekday morning.
Sign Up