In 1964, Justice Black wrote “No right is more precious in a free country than that of having a voice in the election of those who make the laws under which we must live. Other rights, even the most basic, are illusory if the right to vote is undermined.” But the right to vote isn’t explicit in our constitution. Not until 1941 did the Supreme Court establish the right to vote, noting that qualified voters who cast their ballots also have a right to have their ballots counted.

This week, the Vermont House will exam the ballots cast in a contested Orange County race to ensure that every valid vote is counted. Visually inspecting the ballots in this race is the best way to resolve legitimate concerns about whether ballots have been accurately counted. While the legislature isn’t asked to exercise its power to resolve disputes like this very often, it has done so recently: in an appeal involving my own election six years ago.

In that case, my opponent exercised his lawful right to ask the legislature to examine the outcome of our race. Though unnerving at the time, I understood that his challenge was about making sure that the outcome of our close election was precise and correct. In Vermont’s election system, the candidates themselves hold nearly all the power to challenge an election. This power functions as a key protection of our democracy. Challenges like this – especially in close races – provide an opportunity for review, ensuring that no voter is unlawfully franchised or disenfranchised.

Two months ago, after three official counts of the ballots in our 2016 re-match, I lost my re-election bid. By using human eyes to inspect each ballot during the last recount, eight additional ballots were added to the final tally – changing the outcome of the race. Instead of winning by three, I lost by two.

When my opponent exercised his right to examine the ballots – both times – we affirmed that our system works; the will of the voters does prevail. When House members act later this week, they are fulfilling their solemn promise to uphold our constitution – providing certainty that every lawful ballot cast is a ballot counted.

Our democracy is stronger when we aren’t afraid to inspect our elections, in search of the truth. Because in the end, it’s better to lose by a process that’s fair than to win by one that isn’t. Something I know first-hand. 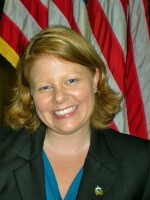 Sarah Buxton
Sarah Buxton is a lawyer from Tunbridge who has served three terms in the Vermont House of Representatives.
See stories by Sarah Buxton
Subscribe To 'The Frequency,' Our Daily Morning Newsletter
Get up to speed on the news Vermont is talking about, delivered to your inbox every weekday morning.
Sign Up