One recent, wet morning, I shuffled into the meeting room. The coat rack held a cross-section of Vermont outerwear—fancier dress coats, parkas smeared with that gray muck we all get from bumping into our cars, and a good number of gritty Carhartt jackets.

I was at the annual Vermont town moderators’ training. The 150 or so participants soaked in moderation wisdom. Veterans with 30-plus years of experience leaned back in their chairs, while nervous first-timers scribbled, with growing alarm, the possible motions, amendments, and amendments-to-the-amendments. These brave moderators, and the many thousands of Vermonters participating in their town meetings, are keeping local democracy vital.

Is town meeting under threat? Absolutely. Participation is vibrant in our smaller rural communities. And a higher percentage of Vermonters live in small towns than in almost any other state. But where Vermonters have adopted a more suburban lifestyle, attendance has dropped.

Meanwhile, Act 46 education consolidation pushes to eliminate school meeting. To Vermont towns that deliberate on their school budgets from the floor, these mergers are a body blow to local democracy. But ominously, where public engagement doesn’t bear the key traits of a good town meeting, studies show declines in citizens’ belief in government legitimacy. Governments lose trust, financial sustainability, and critical public support.

That’s why, across the nation, leaders are madly adopting the best qualities of town meetings. They’re working to counter citizens’ growing belief that government is some far-off monster. We see it in New York and Chicago in Participatory Budgeting, and in Oregon’s Citizen Initiative review – all mimicking the 21st century engagement strategies that, ironically, town meeting has offered for centuries.

Because at town meeting, every voter is a legislator, making binding decisions on issues of finance and governance. Town meeting reminds us that government is a “we,” not a “they.”

If there’s hope for the human race (and some days I wonder), it won’t be because your side won. It’s going to be because we figured out how to let the other side get their needs met too.

Whether we arrive in a fancy dress coat or a dusty Carhartt jacket, town meeting gives us a structure to hear each other.

That’s why town meeting wisdom is being adopted across the nation.

Voltaire famously wrote, "If God did not exist, it would be necessary to invent him." Apparently, the same can be said for Town Meeting. 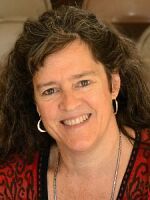