Canada’s in our DNA, literally.

Canadians, blue collar and white, have always been drawn south to the United States by economic opportunity. Between 1840 and 1930, nearly one million French Canadians migrated to New England’s mill towns; and knowledge workers like physicians, engineers and entertainers, drifted south thereafter.

But Americans have taken the reverse route by and large for a very different reason.

Take the Loyalists who maintained an allegiance to the British Crown during the American Revolution. Many of them suffered, or feared, backlash by the Patriots – confiscation of land, burning of homes, tarring and feathering, denial of due process. Of both high and low birth, some forty thousand Loyalists fled north at war’s end.

Other Loyalists were native people like the Iroquois, whose land was overrun by George Washington’s armies. And Black Loyalists, who took up the British offer of freedom from slavery to join the British cause, sought refuge in the Canadian Maritimes.

African-Americans continued their flight to Canada through the years of the American Civil War, an unknown number of slaves using the secret paths and safe houses of the Underground Railroad to reach “Canaan Land.” And Canada became the destination of choice when the 1850 Fugitive Slave Act required all slaves captured in the northern free states, including Vermont, to be returned to their southern masters.

During the Plains Indian Wars, Sioux Chief Sitting Bull fled with his people to Canada to escape harassment by the U.S. Army. The band spent four years under the watch of the Royal Canadian Mounted Police. Chief Joseph’s Nez Perce were attempting to join Sitting Bull’s people in Canada when they were forced to surrender in Montana Territory just short of the boundary.

At least fifty thousand Vietnam War draft resisters and deserters drove their Chevies or VWs across the border. Organizations welcomed and cared for them in cities from Vancouver to Montreal. Most stayed on, even after President Carter declared amnesty on his first day of office.

Canada’s no paradise. It has its own tensions around race and region; and for much of Canadian history, Native Peoples have been harshly treated. But for more than two centuries, Americans faced with real or threatened persecution, have fled north to what they hoped would be a more welcoming and tolerant democracy.

We may be witnessing another chapter in that sad history. And it’s not a history to be proud of. 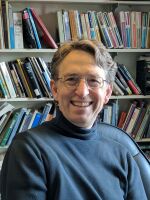 David Massell
David Massell teaches U.S. and Canadian history and directs the Canadian Studies Program at the University of Vermont.
See stories by David Massell
Subscribe To 'The Frequency,' Our Daily Morning Newsletter
Get up to speed on the news Vermont is talking about, delivered to your inbox every weekday morning.
Sign Up