My grandparents arrived in America, refugees of a genocide perpetrated by an Islamic government against its Christian citizens. In 1915, at height of the violence, my grandmother was a ten-year-old girl. She and her younger brother and sister, hid during the day and ran at night for hundreds of miles to an orphanage in Aleppo.

This family history keeps the millions of Syrian children on the run ever present in my mind. This family history also lets me see genocide within America’s own borders - not in the form of lurking terrorists but in our very social fabric.

It begins with classification, the division of peoples into “us” and “them” followed by symbolization, the association of people with symbols like the Star of David, the cross, the donkey, the elephant, the confederate flag, the swastika. When filled with hate, symbols become tools of genocide.

The rise of armed white supremacist groups makes Stage 5 utterly imaginable - the secret organization by the state of militias to carry out the genocide.

The hate unleashed in the 2016 elections show that we live in Stage 6 - polarization. Here extremists divide us into Christian/Muslim, female/male, urban/rural, black/white, gay/straight, leading to actions like the desecration of Jewish cemeteries in Philadelphia and St. Louis and the killing of two brown-skinned men in suburban Kansas City.

The President’s Executive Order on Immigration, dips our toes into Stage 7 - Preparation. By placing all Muslims, whether citizen, refugee, or green card holder into the category of “potential terrorist” leaders of the perpetrating groups use fear to lay the groundwork for the “final solution” that might lie ahead.

Only Stage 8 - persecution - the segregation of those “others” into ghettos, camps and the like, lies between preparation and Stage 9 - extermination - the actual killing. Denial - Stage 10 - always follows extermination. America, of course, has its own denials.

My grandmother’s family name, Troshagirian, is Armenian for flag bearer.

The rapid flow of law suits and protests in the wake of the “Muslim Ban” demonstrates the strength of American values and the constitutional processes that will let us reverse these stages of genocide.

This American flag, we can all bear with pride. 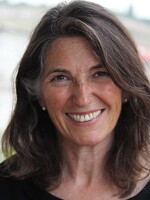 Dana Walrath
Dana Walrath, a writer, artist and anthropologist, likes to cross borders and disciplines with her work. Passionate about the power of art for social change, her creative works include Aliceheimer’s, a graphic memoir about life with her mother and dementia; Like Water on Stone, a verse novel about the Armenian Genocide; and “View from the High Ground” an interactive installation on dehumanization and genocide. She has spoken extensively about the role of comics in healing throughout North America and Eurasia including two TEDx talks. Her new picture book I Am a Bird inserts constructive male role models into the #metoo movement. You can visit her at danawalrath.com
See stories by Dana Walrath
Subscribe To 'The Frequency,' Our Daily Morning Newsletter
Get up to speed on the news Vermont is talking about, delivered to your inbox every weekday morning.
Sign Up