Vermont Attorney General TJ Donovan and Governor Phil Scott both supported immigration bill S.79 now passed by the legislature. Some say it was largely an anti-Trump symbolic gesture, while others say it sets the stage for a sanctuary state without explicitly stating that goal.

Now Attorney General Donovan has followed up with a compliance guide for cities and towns. In the introduction, he stipulates that the guidance provided therein doesn’t challenge existing federal law or Vermont’s obligation to uphold it - an important point since no state has constitutional authority to interfere with federal mandates. But some of the guide’s wording appears to be inconsistent with that claim.

Unfortunately, I can’t see any way to interpret directives like these except as encouragement for direct non-cooperation, interference and obstructive actions by our police in the execution of established national policy.

But the cooperative relationship between local law enforcement and federal officers is an important one. Between 2014 and 2016 alone federal border and immigration officials here in Vermont provided crucial assistance to VT law enforcement more than 400 times.

But in any case, key language in the guidance from the Attorney General appears to directly conflict with federal law - and might put both our officers and the public at risk. If police can’t fully investigate crimes, arrests may not be made that should be, cases could go unsolved, and offenders might not see justice. Vermonters have every right to expect better.

I think it’s interesting that both Donovan and Scott have moderated much of their immigration rhetoric after recent trips to Washington. Too bad it didn’t translate to more sensible guidelines for our local police, who work hard to do their job against difficult odds. 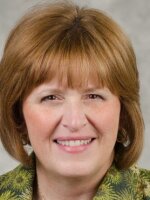 Wendy Wilton
Wendy Wilton has been treasurer of the City of Rutland since 2007, achieving clean audits since 2012. She cares deeply about the financial strength of the state and its communities.
See stories by Wendy Wilton
Subscribe To 'The Frequency,' Our Daily Morning Newsletter
Get up to speed on the news Vermont is talking about, delivered to your inbox every weekday morning.
Sign Up