We chose the name Total Loss Farm on a whim. We’d never heard of a commune. But when we arrived, fresh from riots in Washington, DC, we could see a future in the open fields, woods, rickety house, barn, and outbuildings. At 23, I wanted to dig in and create our sudden Eden.

Our number included four or five strong women, a devoted gay couple, one guy in the closet, and three or four straight men who weren’t particularly macho. We valued privacy and solidarity, but had no rules, no plan, no pecking order, and no leader. "We’re all prima donnas here," we liked to say.

I had no practical skills, but I remember the pleasure of learning to split wood, tend fires, care for the cows, garden, and turn out great collective dinners. We wrote books and read our “produce.” We established a nonprofit corporation to secure the farm and support our creations. We called it the Monteverdi Artists Collaborative.

We never set out to smash monogamy. Couples arrived and some unraveled. Relationships formed and sometimes faltered. But the rhythms of the farm provided continuity, and friends offered solace. Following the suicide of a friend who couldn’t make peace with his sexuality, gay liberation swept our community. Men came out, and I was glad for them.

I married the first interesting man who crossed my path, a brilliant but afflicted musician, and we had a splendid daughter. We left the farm together but later my daughter and I returned alone.

When we staged Alice in Wonderland in a pasture, I played the imperious Caterpillar, asking "Who are you?" knowing in real life, I was a battered wife, a survivor. So I joined the fledgling Women's Crisis Center and worked on the Board for 15 years, where volunteers ask that other most pressing question, "How could you let him?"

In 2017, patriarchy is still alive and well, but so is our resistance. Next year, as Total Loss Farm turns fifty, four generations will gather to share stories and ponder the future.

Many old communards have become pillars of the community. But refuge is still at the heart of it for me. 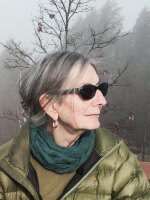 Verandah Porche
Verandah Porche, is a poet, performer, essayist, and itinerant teacher based in Guilford, Vermont. She travels around New England creating told poetry and shared narrative with those who need a writing partner. http://verandahporche.com/
See stories by Verandah Porche
Subscribe To 'The Frequency,' Our Daily Morning Newsletter
Get up to speed on the news Vermont is talking about, delivered to your inbox every weekday morning.
Sign Up