We were commune dwellers, anti-war and civil rights activists, radical students, academics, and local food co-op organizers, both Vermont-born and not. It was a turbulent era, in which we rejected the status quo of our childhoods, and searched for - or created – new definitions of community. In the radical Women’s Movement, we saw ourselves as a revolutionary part of a global liberation struggle. We were interested in sexual liberation and changing our roles at home and in the world. We rejected being limited to cooking, cleaning, and changing diapers. We fought for and won reproductive rights.

In Vermont, a network of women gathered locally and on campuses like Goddard and Windham College to talk, demonstrate, sing, read theory and try out new ideas and ways of living.

After graduating from Bennington College I was in the civil rights movement in Mississippi and New Haven. I lived in NY and San Francisco before returning to Vermont in 1967 to live in a commune right in the center of Pawlet, where we got to know local people.

In 1968 while teaching French at Castleton, I managed to organize an SDS chapter and a women’s group before the administration terminated my contract. In 1970 I moved to Boston where I joined the Boston Women’s Health Collective and participated in the production of the groundbreaking book, Our Bodies, Ourselves.

And later, I became an Occupational Therapist,

I inherited my radicalism from my mother and grandmother, who’d been members of the Women’s International League for Peace and Freedom. On Jan. 15, 1968, my mother and I together attended the first of many women’s marches on Washington in which 6,000 women marched in honor of Jeanette Rankin, the Montana pacifist and first woman elected to Congress, in 1916.

This year I participated in the Women’s March in Boston on January 21 with my son and his family because the need to defend our rights to healthcare, reproductive freedom, and equality is never over; and we have an obligation to model and pass on our experience to younger people.

One of the most important lessons I’ve learned from being active in the women’s movement is that the most lasting change usually begins with inclusive grassroots organizing - and I hope to leave that knowledge as a legacy to my children, my grandchildren, and my community. 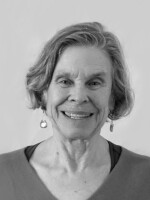 Liz Blum
Liz is the county chair of the Vermont Progressive Party and serves on the Hanover Co-op Board. She was named for Elizabeth Gurley Flynn, the "Rebel Girl," and has tried to live up to her name through organizing, hearing people's stories, foraging mushrooms, gardening, reading, biking, hiking and serving her community in myriad ways while raising her family.
See stories by Liz Blum
Subscribe To 'The Frequency,' Our Daily Morning Newsletter
Get up to speed on the news Vermont is talking about, delivered to your inbox every weekday morning.
Sign Up