In 2015, there were more than 52,000 drug overdose deaths in just that year. In 2016, it's estimated that number will be exceeded by 10,000 more. Many say this figure is an underestimate - but even if it’s bang-on accurate, drug overdose is now the leading cause of accidental death in the US.

My daughter, Laura, was among the unfortunate drug casualties in 2015. For many months, hers was the only death that mattered to me. But I remember a true moment of liberation when I realized that I was only one among thousands of parents facing this loss. My daughter was one among tens of thousands of young adults who died, and are dying still, at the astounding rate of 142 people each day.

And I began to see Laura’s life, precious as it was and is to me, in the greater context of all the lives lost to this pernicious disease. When an epidemic of this proportion threatens so many, a rage of a certain kind comes into play. Many of the same cruel epithets we hear now were also heard during the AIDS era, dismissive of the value of a life lived on the edge of societal norms. Fear, it seems, reveals stigma in its most naked form.

And just as in the AIDS epidemic, stigma and denigration of drug users have, among other factors, limited the public’s response to the current overdose crisis. But also as with the AIDS epidemic, we now know that drug addiction and overdose death can affect anyone anywhere.

When it finally became clear that any citizen could contract the AIDS virus through something as innocuous as sexual intercourse, attitudes began to shift very rapidly.

On August 7th, President Trump finally agreed that this was indeed a national public health threat, but unfortunately, the necessary actions to make it official have still not happened.

So amid all this relentless and senseless dying, the wonder is why we’re not more concerned as a nation than we are.

The AIDS Memorial Quilt documented and made tangible the thousands of lives lost to that devastating disease. And now, as the AIDS Quilt turns 30, perhaps it’s time to create a similar project about those lost to drug addiction, or to put it more accurately, substance use disorder.

The epidemic of death by drug overdose is a crisis by any standard, and a health emergency that we can no longer afford to ignore. 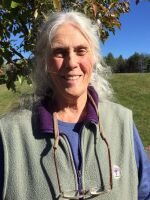 Linda Mulley
Linda Mulley is an autism educator who has taught at UVM, Dartmouth and the Vermont Higher Education Collaborative; she is the co-author of All Children Matter (White River Press, 2014). She has lived in the Upper Valley for 40 years.
See stories by Linda Mulley
Subscribe To 'The Frequency,' Our Daily Morning Newsletter
Get up to speed on the news Vermont is talking about, delivered to your inbox every weekday morning.
Sign Up