Today, we in the US are grappling with the unsettling fact that Russia sought to influence our 2016 Presidential election. But one hundred years ago today, on November 7, 1917, Americans began to be unsettled by a rather different Russian threat: the Bolshevik Revolution.

That revolution led to five years of civil war in Russia, and then it became an important catalyst for horrific events in Europe and the rest of the world – events that profoundly altered the course of history.

This summer, with two Russian colleagues, I undertook a book and movie project called The Children of 1917. Together we traveled more than 20,000 kilometers across Russia, Poland, Finland and Belarus to meet with, interview, photograph, and film 22 Russian centenarians – to learn how their hundred-year lives reflect the past century’s history.

It’s one thing to read about how well-to-do peasants, or kulaks, were dispossessed and exiled to Siberia in the 1930s by Stalin - and quite another to meet someone who was herself branded as a kulak, to hear how it dislocated her life.

It’s one thing to read about the start of World War II – and something else again to hear how a mother dressed her daughter in her best smock and shoes, threw some things into a suitcase (including a saucepan) and fled just ahead of the Nazi advance.

Another walked to school in Leningrad despite the terrible German blockade. “They dropped bombs,” she said, “but they did not fall on me.” One man had laid and diffused landmines around the blockade, while another was thrice wounded in the war.

It’s astonishing to me that anyone could survive the last 100 years of Russian history. Yet we met energetic people filled with incredible resilience of both spirit and body, despite the fact that, if you live to be 100, you will bury many, many people you love.

Among the secrets to long life offered by these centenarians were to eat real food, keep moving, and do good for others.

And when you hear advice like that from the lips of one who’s lived through 100 Russian winters, one whose soft hands you’ve held while they laughed at your offbeat joke, it’s profoundly moving.

Few things in life can compare to making a 100-year-old babushka laugh. 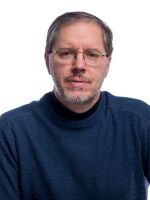 Paul Richardson
Paul Richardson is a photographer, writer, and publisher based in Montpelier. His has authored several works of fiction and nonfiction, and has edited two national award-winning books. For the past 20 years he has also been the editor of Russian Life magazine. For more information, visit paulerichardson.com
See stories by Paul Richardson
Subscribe To 'The Frequency,' Our Daily Morning Newsletter
Get up to speed on the news Vermont is talking about, delivered to your inbox every weekday morning.
Sign Up