The dark, decorated exterior of the ganache-glazed chocolate cake tempted me as I imagined the rich taste I would experience with my first bite. I imagined the enthusiasm of my taste buds as they encountered the ornamented maraschino cherries sprinkled amongst the dollops of buttercream frosting.

It sat there mocking me in the slightly dented plastic cover enclosed with a seal reading the word, “Hannaford.” I contemplated my first bites, barely registering the muted, faraway voices of the meeting happening around me. I was so fixated on the silver utensils and plastic plates begging for me to take them that my fingers danced underneath the smooth wooden table, and I prayed my stomach wouldn’t betray me. I nodded empathetically, attempting to focus on the conversation as the members around the table droned on. “Just nod,” I thought to myself, knowing that if I could make it through the next few minutes, I could indulge and devour that creamy chocolate cake.

“Free write,” a voice announced, awakening me from my trance. I looked up, puzzled, as the speaker passed around the backs of old agendas and rummaged for a random assortment of promotional pencils and pens. I stared at my empty white sheet and dull pencil with no eraser as I tried to force my mind to create, to write, to do anything but think about that delicious desert.

But my mind was blank. Desperately I wrote words on the paper, trying to form the semblance of a sentence, but ended up crossing them out time and time again. Eventually, my mind opened up and my fingers swept across the page in an attempt to keep up with my hurried thoughts. My brain was making associations faster than before, stitching together metaphors and similes and employing alluding alliteration as if it were an unfocused child with too much sugar. One page was filled, and then another, and another.

“Stop!” declared the same voice while ending the irksome beeping from his phone. He looked up hopefully and asked if anyone would like to be the first to share. A moment of silence followed as confessions of shoddy work and unsatisfactory results filled the air-conditioned office. The voice, unsympathetic to the pleas of the three girls beside me, encouraged and then prodded each one of us to share our half-baked pieces. When it came to my turn, I unwillingly shared my nonsensical ramblings, haphazard one-liners, and jumble of words. It was then that I realized that what I thought was a incoherent mess was in reality the budding of hunger-inspired creativity.

Writing and the creative process, much like my proverbial cake, is having an idea so tempting that it glimmers in your mind like the lights of Times Square. It’s being so drawn to an idea that you are oblivious to all else, like a marathon runner who finally sees the finish line. Writing is the sweet satisfaction of crafting the perfect sentence, or dismembering an elusive allusion you unwittingly make as if you are biting into a scrumptious dessert after a long day of fasting. It is the delay of reward, of bumbling through grammar and awkward phrases in hopes of striking gold; it’s the ability to struggle through a mind-numbing meeting for that first bite of cake.

Writing is the ability to pin one’s self to a dish to be dissected and examined, to be read like an unfinished manuscript, and withstand the criticism. It is the ability to expose yourself to the world unabashedly, an unconcerned naked man lounging on a nudist beach. It’s revealing your most ridiculous free writes and intimate thoughts, knowing that your reward is just within reach.

Writing is something I cherish, perhaps second only to the satisfaction of a slice of chocolate cake. 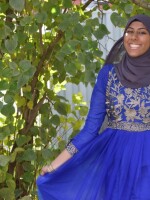 Kiran Waqar
Kiran Waqar is a freshman and Frederick Douglass Distinguished Scholar at American University studying International Studies. She is also a member of the poetry quartet Muslim Girls Making Change.
See stories by Kiran Waqar
Subscribe To 'The Frequency,' Our Daily Morning Newsletter
Get up to speed on the news Vermont is talking about, delivered to your inbox every weekday morning.
Sign Up