The album quilt craze is thought to have emerged in the mid-Atlantic in the early 1840s, making its way to northern New England within a decade. Marked with the names of family and friends, these were keepsakes meant for hope chests that commemorated major life events and reminded their owners of heritage and history.

These so-called friendship album quilts took their inspiration from autograph books, popularized in the 1830s by publications like Godey’s Lady’s Book and fueled by the development and availability of reliable, affordable indelible inks and steel-nibbed pens in the 1840s.

Passed down through four generations of women with deep roots in the Green Mountain State, one such quilt followed its keepers from Vermont to Massachusetts, Maine and even Florida. Reminding its keepers of generations of ancestors, this quilt is a tangible vehicle for the preservation of women’s history and memories carried from the 1840s into the 21st century.

Two dates, seven towns, 13 varieties of cotton chintz, 40 pieced blocks in a “chimney sweep” pattern, 44 names inked in four different styles, and a pair of cryptic notes carefully inscribed on two scraps of white cotton muslin are the essential components of this red-and-white bedcover. One note announces that “this quilt is a keepsake never to be used. My mother pieced it before she was married to my father, Frank Bromley;” and the other declares that “B.A. Fisk quilted this in 1875.” Curiously, a central quilt block is marked with a second date of 1857.

Additional research has told us that Betsy Ann Fisk was born in Danby in 1835 and married Frank Bromley at age 22. Before her 1857 wedding, Betsy painstakingly pieced together the blocks of her future quilt. Probably inscribed by a team of helpers possessing excellent penmanship, the blocks included the names of friends and family from homes in far-flung towns ranging from Chazy, Ellensburg, and Peru, New York, to Clarendon, Colchester, Danby, and Dorset, Vermont. It also includes an inscription with the name of Betsy’s maternal great grandmother Betsy Signor Lobdell.

The Bromley’s busy household was in Danby, with nearly four hundred acres, several dozen cows, horses and six children. So it’s reasonable to surmise that day-to-day life kept Betsy away from her needlework until 1875, when apparently she finally found time to complete her album quilt - nearly two decades after she started. 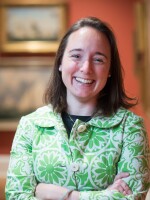 Katie Wood Kirchhoff
Trained as a specialist in American art history, decorative arts, and material culture, Katie holds a BA from Smith College, an MA from the Winterthur Program in American Material Culture, and a PhD from the University of Delaware. Katie has worked for a range of museums and cultural organizations including the American Philosophical Society, The Philadelphia Museum of Art, and Winterthur Museum and Country Estate, and is currently the associate curator at Shelburne Museum where she researches and organizes exhibitions focusing on the museum’s historic collections of American fine, folk, and decorative arts.
See stories by Katie Wood Kirchhoff
Subscribe To 'The Frequency,' Our Daily Morning Newsletter
Get up to speed on the news Vermont is talking about, delivered to your inbox every weekday morning.
Sign Up