I took my four-year old son, Henry, to the State House to watch the vote on the gun control bill S. 55. I’d never been inside the State House, and we sat in the balcony since I couldn’t be sure how long we’d last.

The surroundings were inspiring, and I was surprised and impressed by the patient and deliberate governmental process. It was interesting to be there with a preschooler on my lap, and I joked to the man next to me that things might move a lot faster if more four-year-olds were in the audience.

I was in fourth grade when Dad first took me to a rifle range. And my parents and I once took a handgun course together, where the final exam was “clearing” a house by kicking in doors and shooting at human outlines. As the father of three daughters, Dad wanted us to be able to protect ourselves, and to have the sense of empowerment that comes with that ability.

The man sitting next to me in Montpelier that day was a shooting coach, and we knew some folks in common, because in high school I’d been the female junior national skeet shooting champion. But I hadn’t grown up playing with guns as weapons the way my sons do now. I resisted having toy guns in our house for years, and when I finally let my oldest son have a nerf gun I told my astonished husband we were going to take a gun safety course as a family.

As both a teacher and parent, I don’t know how to reconcile my dad’s wish for his daughters not to be afraid of guns with my sons’ desire to play with them – especially in a complicated world where technology seems to force everything to go faster and us to be more reactive.

At the Statehouse, Henry and I had to leave hours before the actual vote took place. And as we did, I realized I was deeply grateful for a system that forces us to be deliberative, even if, at times, the pace can seem painfully slow - and not just to a four-year-old. 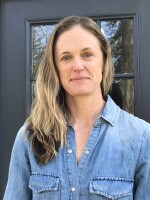 Hadley Bunting
Hadley Bunting is a mother of three and a former teacher. She lives in South Burlington and works at the Charlotte Congregational Church.
See stories by Hadley Bunting
Subscribe To 'The Frequency,' Our Daily Morning Newsletter
Get up to speed on the news Vermont is talking about, delivered to your inbox every weekday morning.
Sign Up