We all have a duty as citizens to engage in the political process - as I did this winter, when I testified before the state Legislature on behalf of preserving net neutrality.

To me, it’s just common sense to regulate the online playing field, by not allowing content to be slowed down or sped up, depending on payment to Internet Service Providers. The bill to protect it had overwhelming support here, so it passed easily and was signed into law. And I found this action uplifting, showing as it did that it’s still possible to cross party lines for the good of the people.

Real progress was also made this year when comprehensive gun regulation was passed that banned bump stocks, created magazine limits, expanded background checks and created a system that barred young people from using guns without the proper safety courses.

I was also encouraged when the legalization of recreational marijuana use and cultivation was passed and signed - especially given that these efforts were both the result of people working together on policies they believe in and support.

So I found quite a bit of reason for optimism in this session, even though there were some major setbacks in the fight for truly representative democracy.

Among them, Governor Scott vetoed major bills that had massive support from both the legislature and the public. S.40 sought to raise the minimum wage to $15 by 2024, a measure that would have helped working families and raised wages statewide. S.196 would have created a paid family leave program, allowing for hard working citizens to have earned time off. S.197 had the goal of making companies that exposed Vermonters to toxic substances pay for related medical costs. House Democrats don’t have the two-thirds control they would need to override the governor’s vetoes, so these efforts are effectively dead.

Ultimately, this session has revealed something fundamental about the political process: real change is most often the result of people uniting and getting involved. When we don’t do that, even the best ideas can falter along the path to becoming a law.

The political process tends to be polarizing, and can make us feel more apart than together. But in Vermont leaders are accessible and can be held accountable, if only we work together to support the issues we care about. 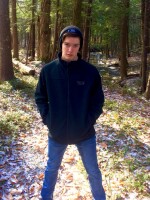 Miles Anton
Miles Anton of Brattleboro is a high school student, writer and filmmaker.
See stories by Miles Anton
Subscribe To 'The Frequency,' Our Daily Morning Newsletter
Get up to speed on the news Vermont is talking about, delivered to your inbox every weekday morning.
Sign Up