In the decade since stepping down as President of Dartmouth, I've been working with veterans, especially encouraging them to continue their education. This Memorial Day, I'd like to remind each and every one of us to pause and do what we should do every day: remember those who sacrificed their lives in our wars.This year we'll be remembering Normandy on the 75th anniversary of the landing there on June 6th. But we should also recall a Vietnam battle, fought by the World War II generation's sons.

More than 58,000 names of the fallen are inscribed on the Vietnam Veterans Memorial Wall in Washington – including those of 100 Vermonters. And this month is the 50th anniversary of the Vietnam battle for the mountain, Dong Ap Bia, more often referred to as Hamburger Hill.

As an extended conflict for a piece of ground, it was an anomaly in the American War in Vietnam. Units from the 101st Airborne landed at this desolate place in the Ashau Valley on May 10, 1969, and only 30 percent of them reached the top after 11 days of fighting.

I climbed the hill five years ago with two North Vietnamese army veterans who had fought there – and who remembered well the young Americans who day after day came back up the hill, taking heavy casualties.

George Lamothe from St. Albans was one of the casualties on that hill. Already wounded, this 22-year old soldier volunteered to help carry his injured friend's stretcher to the medevac helicopter. He and three others were killed by a rocket that struck the litter party he had joined.

On May 20 there was no flag raised when American soldiers reached the top – just as there was no celebration or recognition back in the states at the time. Those who fought there were heroes in a war that recognized no heroism. Appreciation of their service and their sacrifice is long overdue.

On this day, we join in extending our thanks to them. 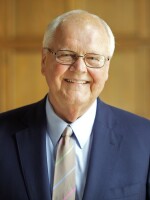 James Wright
James Wright, historian and President-Emeritus of Dartmouth College, served in the Marine Corps. Since 2005 he has been working to support veterans. He has been recognized for his work by the Secretary of the Army, the Commandant of the Marine Corps, and the Commander of the Veterans of Foreign Wars. His most recent books focus on those who served, including Enduring Vietnam: An American Generation and Its War?(St. Martin’s Press, 2017), and Those Who Have Borne the Battle: A History of America’s Wars and Those Who Fought Them?(Public Affairs Press, 2012).
See stories by James Wright
Subscribe To 'The Frequency,' Our Daily Morning Newsletter
Get up to speed on the news Vermont is talking about, delivered to your inbox every weekday morning.
Sign Up