There's a summer leadership and government-in-action learning program for high school juniors sponsored by the American Legion Auxiliary in which young women become knowledgeable in the practice of freedom, democracy and citizenship. It's called Girls State and there’s a similar program for boys. I understand both are galvanizing, and I've met many legislators and leaders who named Boys or Girls State as a positive influence in their development.I've spoken at Girls State several times, now. And I've loved meeting these young women, then seeing where they end up, and how the experience helped make them more comfortable in seeking leadership roles. At Girls State, they might campaign for Governor or Attorney General or advocate for a particular policy in the program. But in my conversations with them, I often discover that many of these young women still don't see the experience as leading to running for office in real life. And that's a shame.

But it's borne out in the numbers. A formal study conducted by the Eagleton Institute of Politics a few years ago found that there's a consistent pattern of having very few elected officials under the age of 35. It hovers around five percent of all elected officials, and only about a quarter of that five percent are women.

In other words, women under the age of 35 constitute about one percent of our country's body of decision-makers.That's a reality that affects not only their representation at that stage of life, but further complicates matters because young people tend to have staying power once they do enter politics. More than half of our current Congress started in politics before the age of 35, and they're mostly white and male. So we shouldn't be surprised that they have few qualms about making laws relating to women under the age of 35.

After speaking, I stayed around and watched as most of the young women of Girls State lined up to register to vote – which I found encouraging. We need change at all governance levels, and it's my hope that this experience will enable many of these young women to begin to see themselves as lifelong political leaders. 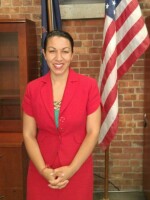