The attorney general's office filed the charges against Christopher Sullivan on Wednesday and he appeared in court to enter his pleas a day later.

Sullivan is accused of driving the car that struck and killed Jane Outslay, 71, as she crossed a downtown street in early April. Police say the car never stopped. Sullivan's lawyer subsequently came forward and the investigation centered on him.

The attorney general took on the case because of Sullivan's close ties to prosecutors in Rutland County. He is charged with leaving the scene of a fatal accident and driving under the influence with death resulting, both felonies.

Sullivan spent 19 years working for the city of Rutland. 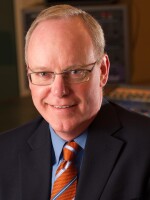 Ross Sneyd
Ross joined VPR in 2007 and oversaw the production of up to nine daily newscasts on the state-wide network. A veteran journalist, Ross worked with The Associated Press for 18 years, including 16 in Vermont covering politics, state government and the state Legislature. He has covered the presidential primaries in New Hampshire, the presidential campaign of Howard Dean and the aftermath of Hurricane Katrina in New Orleans.
See stories by Ross Sneyd
Subscribe To 'The Frequency,' Our Daily Morning Newsletter
Get up to speed on the news Vermont is talking about, delivered to your inbox every weekday morning.
Sign Up