Monarch butterflies have been scarce in Vermont this summer due to larger forces that have caused a 90 percent drop in the population.

Monarchs winter in central Mexico, and then migrate north all summer as generations of butterflies reproduce throughout the season. But biologists noticed a steep decline in the butterflies in their winter habitat, and the numbers have not rebounded over the summer.

Conservation biologist Kent McFarland with the Vermont Center for Ecostudies says there are several factors contributing to the population drop.  “The weather this year was really the final tipping for them, we think," says McFarland. "Last year there was a really horrible drought in the Midwest and Texas where the heart of the monarch population is located," noting that the butterflies do poorly in drought conditions and high heat. "So productivity last year was terrible. We saw very low populations in Mexico overwinter. We expected that.”

McFarland told VPR’s Vermont Edition that the difficult weather systems in the last two years have exacerbated longer term problems face the Monarchs, particularly agricultural practices in the United States that are reducing their breeding habitat.

The Monarch population is measured in the number of acres they cover in their densely packed winter habitat in central Mexico. McFarland says there has been a steady decline in numbers of butterflies since 1996, from 15 acres of forest down to 3 last winter. McFarland says that represents a drop from about one billion butterflies down to 60 million in 15-18 years. "That is a heck of a drop of population.”

McFarland holds out hope for the rebound of Monarch butterflies. He says if their winter and summer habitats provide ideal conditions, the insect can make a significant rebound in one season.

Jane Lindholm
Jane Lindholm is the host, executive producer and creator of But Why: A Podcast For Curious Kids. She also produces special projects for the station. Until March 2021, she was the host of the award-winning Vermont Public Radio program Vermont Edition.
See stories by Jane Lindholm 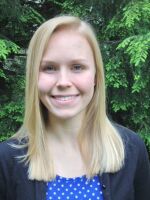 Annie Pruitt
Annie was an Assistant Producer for Vermont Edition summer 2013.
See stories by Annie Pruitt
Subscribe To 'The Frequency,' Our Daily Morning Newsletter
Get up to speed on the news Vermont is talking about, delivered to your inbox every weekday morning.
Sign Up