With harvest season underway, Burlington has a brand-new farmers market on Wednesday afternoons through September.  It’s in same City Hall Park location as the big Saturday market, but this one is different.

On one recent Wednesday, with fewer than dozen stalls, there were  few customers. But what vendors and customers were present were enthusiastic.

Pam Chumski Higgins is on the board of Slow Food Vermont, the group organizing the Wednesday market.

“People are just so excited.  But people didn’t know about it.  So we are just trying to get the word out,” she says.

Even as they spread the word, the Slow Food group wants the market to remain small and, well, slow.

Marc Cesario who raises beef and pork in Cornwall and says the Wednesday market doesn’t have the bazaar or street fair atmosphere of the Saturday market.  He’s happy if he doesn’t move as much product – he mainly wants the chance to chat.

“That ability to just slow down and have that conversation with the customer is a little more present here than at the Saturday market which can be a little crazy,” Cesario explains.

Compared to the Wednesday market, Saturday Farmer’s Markets like the one in Shelburne are much busier affairs.

There, under the banner Flower Power, Ann Matthews sells plenty every Saturday. She’s been  trying to get a booth in Burlington for years.

“It’s 12 years we’ve waited to sell flowers and things.  The Burlington’s Farmer’s Market protects its vendors.   And there’s a limit as per who sells what,” she says.

Matthews is now among the select group in Burlington on Wednesdays – farmers and growers only, no hot dogs or burgers or face painting – but plenty of time to talk about her organic farm in Ferrisburgh.

“It does mean that you’re not polluting the lake with Roundup, you’re not getting fungicide on your flowers,” she says.

On a recent day at the Wednesday market, customer Jacob Evans is taking a break from his customer service job down the street at Fletcher Allen, savoring the cheese spreads at the Shelburne Farms booth – but not planning to purchase anything, because he doesn’t have any place to put it at work.  For Evans the busy Saturday market has a special appeal.

“I really like coming to the one on Saturday just for a sense of community.  I run into my friends I get a nice lunch I hang out with people,” says Evans.

So it’s not clear whether the Wednesday slow food market will catch on, but if it does, it may be extended into October. 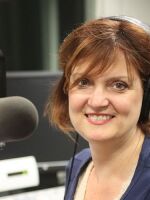