Thank you to everyone who supported VPR during our four-day fall membership drive. If you didn't get a chance, there's still time to join the community of supporters that makes VPR freely available to all. Make a gift now >>

More Than 'Giving Mommy A Break': Thoughts From A Stay-At-Home Dad

The thing I worried most about before my son was born was how a man without a father could become a caregiver to an infant.

And I wouldn’t say that question was easy to resolve, but when he arrived and I held him, I knew right away that I wanted to stay home and raise him. I quit my full-time job and became his primary caregiver.

So I’m a parent now, but I’m still a very social guy, and it’s important to me that my son meets people. We go to play groups and sing-a-longs, but mostly we like to walk around and visit people we know. On these same walks, my son and I have also encountered folks who don’t know us. And man, have they said some crazy, painful, off-the-wall stuff.

What you need to know is I’m a tall, broad-shouldered black man in Vermont.

Apparently, these qualities combined with a tiny infant strapped to my belly — me kissing him, singing to him, dancing with him and watching every tiny movement — doesn’t compute for quite a few middle-aged, white, Vermont women.

The feedback has been constant from day one.

Everywhere I go and interact with new people, it ranges from mundane and silly to heartbreaking and cruel. I hear, “you’re so gentle with him, I can’t believe it…" "You’re giving mommy a break.”

These are the silly comments. Of course I’m gentle with him; he was just born and he’s mine. I’m not just spending time with him; I’m not just babysitting. Fatherhood requires me to be present for him at all times.

Of course, race comes into play. I get questions from “Were you a professional football player?” to “Were you in prison for felony murder?” and even, “Are you going to knock me down and take something from me?”

All this while I’m holding, diapering, feeding and loving my son.

And that’s just the point — society is conditioned to believe that fathers are not caregivers and that black men are not good fathers.

So the answer to the question about how a man without a father becomes a caregiver to his infant son is simple: I just do everything he didn’t do — and nothing that he did. 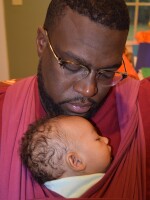 Marlon Fisher
Marlon Fisher was born and raised in Brooklyn, NY. He moved to Burlington in the spring of 2013 after serving active duty in the U.S. Army as an Intelligence Analyst.
See stories by Marlon Fisher
Subscribe To 'The Frequency,' Our Daily Morning Newsletter
Get up to speed on the news Vermont is talking about, delivered to your inbox every weekday morning.
Sign Up