Verses from a Nation in Transition: Photo Exhibit Features the People of Ukraine

We’ve been hearing a lot about Ukraine recently. From where it is on the map to its debunked involvement in the 2016 election. Even so, photographer Joseph Sywenkyj says we’ve heard very little about the people of Ukraine.

For almost 20 years, the American-born photographer has been documenting the lives and struggles of Ukrainians. His photos are on display in a new exhibit at the Holderness School as NHPR’s Sean Hurley reports.

Listen to the radio version of the story here.

Born in Connecticut and recently relocated to New Hampshire to be near his family, 41 year old Joseph Sywenkyj is now a teacher at the Holderness School. “ I would define myself as an American of Ukrainian descent,” Sywenkyj says, “but I lived in Ukraine for so many years and I've traveled so extensively throughout that nation that I identify myself equally as Ukrainian as much as I do American now.”

As a working photojournalist in Ukraine, Sywenkyj covered the Russian Georgian war for the New York Times, photographed then comedian and now President Volodymyr Zelensky for Ukrainian GQ, he says he’s met “every key Ukrainian major politician almost there is. I met Paul Manafort, oddly enough, when he was working in Ukraine back in like 2010.” Those photojournalism assignments helped support what he considered his real work – photographing the lives of the Ukrainian people -  soldiers, activists, families. At first, the photos made up an exhibit that he took around Ukraine. “Now I'm looking at it a little differently,"he says, “and thinking like, ‘Oh, it's really important for Americans to see this work.’ Because Ukraine is being talked about constantly, but the people who are most affected by like the war, like they're almost non-existent.”

The exhibition opens with a photograph of Masha, a six year old girl standing against a cracked wall, wearing an orange dress.  Masha, like her parents Sasha and Ira, is HIV positive. When he first met the family, Sywenkyj says he was visiting hospitals and orphanages working on a project that documented the country’s high HIV rates.

But soon it turned into something more. “I wanted to find a family to photograph that kind of showed the opposite side like ‘Oh, look, you can be HIV positive and live a completely normal life,’”  Sywenkyj says.

A few steps further and the photos in the exhibit completely change.  Here, a man lies on the street, a casualty of Ukraine’s Euromaidan Revolution, which began in February 2014, just up the street from where Sywenkyj lived, in Kiev.

And then another photo. “This gentleman on February 20th was going up the street hoping to rescue demonstrators who'd been shot by police forces,” Sywenkyj says. “He ended up getting shot three times himself and one bullet passed through his lower spine. And here he is at home, in a wheelchair, kissing his wife.”A shot of a different couple and a different kind of kiss, a young man and woman embracing on the street surrounded by protesters.  “And he was going off to a street battle, just down the street, and they're basically saying goodbye, you know, it's like, he's going off to battle, like he's going off to war almost, and they're saying their goodbyes,” he says, weeping with the memory. “But yeah you hear the crackle in my voice right? I wouldn't be doing this unless I thought it was extremely important…I couldn’t imagine myself not doing this.”

Demonstrators in the Maidan, or Kiev’s Independence Square, wanted a trade deal between Ukraine and Europe. When their president, Viktor Yanukovych, backed out of the deal in favor of one tied to Moscow, the people rebelled.

In the next photo, an elegant woman dressed in black flicks her hair like a model as she steps from the bones of a burned out bus. And then one of Sywenkyj’s favorite images - of an old man brandishing a sword. “And I went down on one knee to make a picture because there's like things on fire in the background just looks like a complete war zone,” he says, “and he saw me, stopped and pulled the sword out of his cane and just stood there and like posed. And I’m like, ‘Who are you, what are you doing here?’ And he's like ‘I'm Grandfather Yuri. I'm here to defend my city.’”

Over 3 days, between February 18th and February 20th, 2014, Sywenkyj says over 100 demonstrators were killed, shot by Kalishnokovs and snipers.“You know it’s kind of long story, but basically the government fell shortly after that,” he says, “and the then President Viktor Yanukovych, who was absolutely corrupt and his inner circle all fled to Moscow after that. And that's when Russia was already launching their invasion. First in Crimea and then in eastern Ukraine.” And so Sywenkyj found himself taking photographs of Ukranian soldiers returning from war.  Injured soldiers. On operating tables. Missing limbs.Wounds, he calls this part of the exhibit.

We look at a soldier named Leonid Khmelkov in a hospital bed as he sits up for the first time in weeks.  “And this is one of his quotes I put here: ‘I named my nerve Putin. It hurts and torments me constantly. What else would I name it?’” Sywenkyj  says. “A lot of these guys had nerve damage. I think that's a common theme through these photographs is physical pain, psychological pain, emotional pain. That's why I called itWounds.Their wounds. The wounds of a nation. Sorry, I've been crying a lot talking about this stuff.

Sywenkyj says he’ll be returning to Ukraine this summer to visit with the soldiers and activists who’ve become his friends and to photograph Sasha and Ira and their now 19 year old daughter Masha, who calls him Uncle Joseph.The exhibit runs in Holderness, at the Holderness School through April 18th.

For more information on the show. 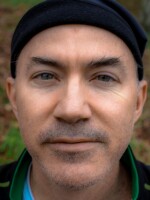 Sean Hurley
Sean Hurley lives in Thornton with his wife Lois and his son Sam. An award-winning playwright and radio journalist, his fictional “Atoms, Motion & the Void” podcast has aired nationally on NPR and Sirius & XM Satellite radio. When he isn't writing stories or performing on stage, he likes to run in the White Mountains. He can be reached at shurley@nhpr.org.
See stories by Sean Hurley
Subscribe To 'The Frequency,' Our Daily Morning Newsletter
Get up to speed on the news Vermont is talking about, delivered to your inbox every weekday morning.
Sign Up