It's a 70-degree night in November in Vermont, which compared to most 2020 headlines, is somehow still remarkable. What's more interesting though, is the fact that I'm witnessing a band warm up for soundcheck right in front of me.

I'm at Big Heavy World, a nonprofit in downtown Burlington with its own recording studio. Visually, it's a bit cluttered: There's cables for microphones, amps and other studio equipment strewn around the floor. The walls of the tiny space we're in are painted with bright spotlights and colorful gels. In the back, there's a photo collage of Vermont musicians gathered over the years.

But the main focus tonight is sound. I stopped by during a recording session of Big Heavy World's podcast, Rocket Shop, which doubly serves as a learning experience for volunteer crew members.

"So what've you got for us," asks Tom Proctor, host of Rocket Shop.

"Wanna do Driftin'?" says Sawyer Kavanaugh, frontman for the Lemon Flyers band. "This song is called Driftin' Slowly, it's off the new album.”

Watch part of the Lemon Flyers' sound check for the Rocket Shop podcast:

The Rocket Shop is a podcast that features Vermont artists of all genres from all parts of the state. You can hear it Wednesdays at 8 p.m. at 105.9 FM. the Radiator — that's Big Heavy Worlds radio station.

The episode I got to witness was for the Lemon Flyers, a band self-described as three brothers and one other dude who get together and produce rock and roll music.

"Should we stop the music in the background?" asks Jim Lockridge, Big Heavy World's executive director."Can you lower it a little bit?"

Lockridge's usually an advocate for turning the music all the way up, as he's championed Vermont musicians through his work over the past 25 years. His laundry list of contributions to the local music scene includes a regional artist directory, a business referral network and most recently, a tiny museum of Vermont music history.

"The music archive goes back solidly 25 or so years that we've been around, and the museum is an extension of that effort," Lockridge says. "So we've collected about 5,000 recordings by Vermont artists. There's an extensive collection of band portraits by photographer Matthew Thorsen taken in the 1990s. And we're expanding the collection by working with community members who have deep roots in different genres or music communities in the state."

"The music archive goes back solidly 25 or so years that we've been around, and the museum is an extension of that effort."— Jim Lockridge, Big Heavy World

Everyone's lives have been disrupted by COVID-19, and Vermont's music industry is no exception. Musicians are canceling tours. Venue workers are getting laid off.

It's not the booming industry it once was, but Vermonters band together. Lockridge and his team have been trying their hardest to keep our artists afloat.

"Our radio station has been an outlet for people in the community to give messages of optimism and hope," Lockridge says. "We adapted our studio to host artists streaming for audiences on social media. Nightclub DJs who lost their venues were able to continue with Zoom dance parties from our studio while broadcasting on the radio station. We organized resources for artists across the state to find support. Financial support from the pandemic helped instruct people, helped include people in virtual festivals."

On top of all that, the inventive minds at Big Heavy World proposed an idea to the state that would support the Vermont arts community. The concept was realized back in October, when Gov. Phil Scott proclaimed November 2020 to be Local Music Month.

More from VPR: 'We Used To Be Very Funny': Vermont Comics Adapt To COVID Conditions

Lockridge's main effort in the month-long celebration was a project called Hear Vermont, supported by a $10,000 grant from the Vermont Agency of Commerce and Community Development.

Posts on social media with the hashtag #HearVT may be entered to win a golden ticket, a prize that any local-music lover would be thrilled over.

I have one more question for Lockridge before I leave: So what happens after November?

"Well, our mission is to preserve and promote Vermont-made music, and we've done that for many years, and I hope we get to continue to do that," he says. "It's a lovely thought to think that the pressure will be on us to continually come up with new programs."

The challenge, Lockridge adds, is the fun part. 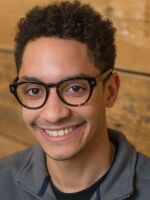